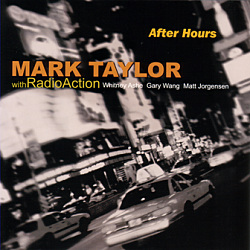 Working with fellow Origin labelmates, alto/soprano saxophonist Mark Taylor delivers his maiden album, featuring four compositions written by him or by the piano player on the session, Whitney Ashe. The remaining four are works similarly fashioned out of the modern jazz mold. Taylor is one of those younger jazz players who perceives this musical genre has something more than dazzling technique, improvisations on standard pop material, or toe-tapping swing. The approach of these Young Turks is more intellectual and thoughtful. That creative format is best expressed in their own material or that of musicians with similar perspectives on the music. Thus, "Walker Evans" is a soft but thoroughly thoughtful vehicle for Taylor's alto. Somewhat to the musical left is Taylor's "After Hours," which builds upon spirited dialogues among the group members, the most interesting of which is the conversation between Taylor and the drums and cymbals of Matt Jorgensen. Matters get relatively livelier with the rendition of one of Thelonious Monk's more carefree melodies, "Bye Ya." But even when the music is upbeat, there is also that ardent, profound, and often dreamy demeanor present in the playing, a la Jane Ira Bloom. The one cut where the group lets its hair down is "The Drifter," with Ashe's piano out front. But as it is wont to do, the soprano sax injects a dose of gravity. "Sweet Little Maia" is the medium for Gary Wang to display his prowess on bass, with a lengthy solo after an opening sax solo by Taylor. This is an album for those who like their jazz leaning toward cerebral, but not so much as to make it shriveled and uninteresting.

Other Reviews of
"After Hours":