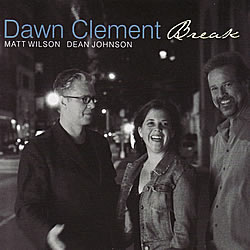 Seattle-based jazz pianist and singer Dawn Clement's back with a new album, Break. I just hope she doesn't wait another five years between albums. I reviewed Hush, her debut as a leader, back in 2003, remarking that she "eloquently shares space with her bandmates ? but her solo excursions show her capable of emulating a whole band, condensing, expanding, and rippling lines on her right side and mining new rhythms on her left." She's still all that, but "that" now absorbs and emanates a thicker multiverse.

At the keys she so often, so confidently, sprints up a scale, drops down a few steps like playing hide and seek, and finally pirouettes around the top of the previous figure. She musters an expressive muddle in the middle of "Distant Oasis," then strides rightly out like a kid through the mud. The opener, Jerome Kern's "I've Told Every Star," stops and goes through "I Got Rhythm" figures, leaving her pulling and pushing at the time.

And her own rhythm pushes and pulls back. More so than Hush, this music emerges into the world from people laboring and breathing together. Drummer Matt Wilson busts out on what sounds like a shopping cart laden with recycle bottles, for Denney Goodhew's "Distant Oasis." Bassist Dean Johnson lacks those organic non-walking (evolving, maybe) figures that Geoff Cooke brought to Clement's first set, but knows when to hang back and when to leap ahead (Jack jump over the two- and three-beat).

Clement's voice, showcased increasingly, shows tones a good walk by the pond and dumps them unceremoniously at the gate ending each phrase. It can't match her finger-breaking in physical complexity but she knows how to plant each emotion, watch it sprout, nurture a bit ("You were my bright shining sun," from Antonio Carlos Jobim's "Just One More For You"), then leave it to respire and expire. Duke Ellington's "Heaven" comes out a little raspy, a little more winsome, arpeggios rolling like snow in a wind snarl, someplace wished for but not achieved. Always leave them wanting more. I hope it's not another 1825 days in percolation.

Other Reviews of
"Break":