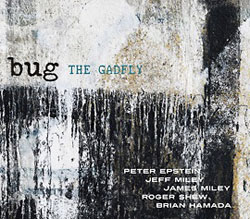 Bug are built around the talents of a handful of players, initially from the Los Angeles area, who have taken on elements of the West Coast sound but incorporate elements of their own structures, their own styles, and their new regions into their sound. More than that, though, this quintet draws on the individual talents of its members to form a series of strong textures. While the bandmembers have extended solos and explorations, there's a tendency in the compositions (all penned primarily by the Miley brothers, also on guitar and piano) for the instruments to move on parallel, and sometimes unison, melodic lines. That careful use of multiple instruments ? along with some delicate chord usage from James Miley ? leads to an almost tactile quality in the music. Portions of this are due to the timbres evoked (for example, Jeff Miley's guitar takes on a rougher sound from time to time, similar to that used in groups like the Mahavishnu Orchestra), but portions are due to the very deliberate use of certain instrument combinations on the parallel melodic lines ? an alto sax and a bass together lead to a very different sonic form than a guitar and piano together, simply from the mix of registers. The Mileys exploit all of these tricks to create pieces that linger beyond their actual notes, and pull the listener along by creating a moment of curiosity at each turn, and only satisfying it as a new moment of curiosity is established. The executions are all worthy, but it's the intrigue created in this album that really sets the group up for musical success.

Other Reviews of
"The GADfly":