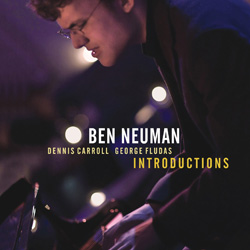 Combining with one of America's premier rhythm teams - bassist Dennis Carroll (Bobby Broom Trio) and drummer George Fludas (Cedar Walton Trio) - Chicago pianist Ben Neuman creates a dynamic debut recording with fresh arrangements of music by Coltrane, Hancock and Horace Silver along with American Songbook classics and an original of his own. Deeply embedded in the tradition, Neuman further pursues new harmonic and melodic concepts as a member of the vibrant Chicago jazz scene while he finishes his degree in philosophy at the University of Chicago.

All About Jazz (John Barron)
Chicago pianist Ben Neuman explores the realm of piano trio jazz for his debut release Introductions. A straight-ahead affair with clever re-harmonizations of familiar standards, as well as classics by John Coltrane, Herbie Hancock and Horace Silver, the young pianist demonstrates an enlivened approach to hard-swinging improvisation. A pair of Chic ...

Richmond Jazz (Dean Christesen)
Neuman slips a waltz arrangement of "Blame It On My Youth" into his debut record, but there's really nothing to blame on his young age. For a 21-year-old, Neuman comes off as an extremely mature player. The risks he takes are exciting both on paper and on the keys, and with time he'll learn to push the boundaries of this music even more. The record ...

All Music Guide (Ken Dryden)
Jazz pianist Ben Neuman's recording debut as a leader is hardly a typical affair, as he doesn't merely focus on showing off his formidable chops or stick to the all-too-typical program of nothing but originals. Instead, his sessions with veterans Dennis Carroll (a fine bassist who has recorded with Lin Halliday, Jodie Christian and Bobby Broom duri ...

Chigaco Tribune (Howard Reich)
Fresh out of the University of Chicago, pianist Ben Neuman hasn't yet had much of a chance to build a reputation, but judging by his performance on the aptly named "Introductions" (OA2 Records), he's off to an uncommonly strong start. Apart from the obvious fluidity of his technique and crystalline quality of his touch, Neuman shows a prodigiou ...

Jazz Chicaco (Brad Walseth)
Young pianist Ben Neumann arrives on the scene with a stirring and surprisingly assured debut. Paying tribute to pianists like Horace Silver ("Peace"), Oscar Levant (the lovely ballad "Blame it on My Youth") and Herbie Hancock ("Riot") the grad student at the U. of Chicago (in philosophy, no less!) announces that his intellect isn't limited to the ...