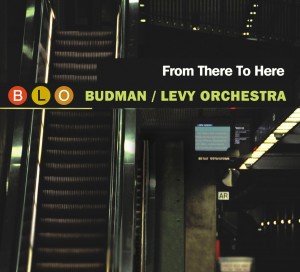 The Los Angeles-based Budman/Levy Orchestra was formed in 2007 to highlight the current generation of dynamic L.A. jazz musicians. Featuring the wide-ranging compositions and lush arrangements of Jeremy Levy, and saxophonist Alex Budman's singular tone and improvisations, the band is quickly becoming an important musical voice on the West Coast. "From There to Here" showcases nine of Levy's original compositions plus arrangements of Michael Brecker's "Slings and Arrows" and "Zona Mona" by Bela Fleck. With a young, focused and inspired musical leadership pursuing a wide swath of textures, forms and influences, the BLO's ever-evolving group aesthetic will be an exciting thing to watch.

Reviews of From There To Here

Jazz Society of Oregon (George Fendel)
This Los Angeles Jazz Orchestra has helped showcase the area's younger jazz musicians since its formation in 2007. On this recording, the BLO presents nine compositions by co-leader, arranger and trombonist Jeremy Levy, and two additional pieces. There is compelling writing and musicianship here, and it will be interesting to follow the progress o ...

Audiophile Audition (John Henry)
Alex Budman, who plays reeds in this aggregation, points out in his notes that during the mid-2000s a number of musicians from around the U.S. settled in Los Angeles and played in various big bands. Some of them with similar musical sensibilities found one another and this fine band is the result. Both Budman and trombonist Jeremy Levy create origi ...

All About Jazz (Edward Blanco)
An appropriately-titled debut from the Budman/Levy Orchestra, From There To Here features 24 of the finest players in the Los Angeles area, plus a four-piece string section, superbly interpreting twelve compositions from composer/arranger/trombonist/co-leader Jeremy Levy co-leader of the group. San Franciscan saxophonist Alex Budman is the other le ...

All About Jazz (Jack Bowers)
If this splendid album, recorded two years ago (2010), is in any way emblematic of what lies ahead, the long-range outlook for big band jazz is indeed bright and auspicious. Saxophonist Alex Budman and trombonist Jeremy Levy have assembled a group of A-list musicians from the Los Angeles area who glide easily through Levy's elaborate compositions ...

Jazz Scan (Ric Bang)
Oh, how I miss those wonderful big band years. Fortunately, I can console myself with groups such as the Budman/Levy Orchestra, another of the large units formed periodically to assuage members of the jazz fraternity’s desires to revisit those days, and create the kind of music that dominated then. If we’re lucky, perhaps we’ll get concerts to ...

Cadence (Don Lerman)
The Budman/Levy Orchestra do full musical justice to the compositions and arrangements of Jeremy Levy on "From There to Here." Saxophonist Alex Budman, who formed this big band with Levy in the mid-2000s, solos on most cuts, presenting a full tenor tone (soprano on some selections) and building his solos judiciously and with an awareness of the f ...