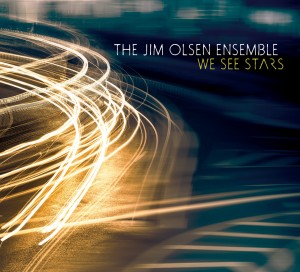 My first goal has always been to record original music that interests me and my second goal is to record it with great musicians whom I respect. Composer Jim Olsen has provided both.
- Dick Oatts

For his most recent release as a leader, composer Jim Olsen decided to forgo his usual big band palette for a smaller, more intimate ensemble. Assembling an all-star nonet of friends, teachers and colleagues, Olsen crafted settings that would showcase these outstanding musicians in some very different musical environments. From the harsh electric landscape of "Dark Sun" to the jaunty swing of "Illogical Conclusion," the band, including trumpeter Bobby Shew, saxophonists Dick Oatts and Lynn Baker, and pianist John Harmon, were given free rein to wander through these soundscapes and add their unique voices to the proceedings. The result is a CD that moves from straight-ahead swing and balladry to Stravinskian rhythmic constructions.

Reviews of We See Stars

Midwest Record (Chris Spector)
For his latest release, the composer pares things down from his usual big band stuff to accommodate of nonet of stars and pals and pals who are stars. The result is a killer, atavistic, west coast jazz date. Hot, happening, swinging stuff, this is sitting down jazz at it’s finest. With loads of utterly cool blowing from the densely packed wind s ...

AllAboutJazz.com (Jack Bowers)
For We See Stars, Oregon-based composer / arranger Jim Olsen has pared his usual big band down to a more manageable tentet but hasn't lessened the ebullience and ingenuity that are invariably a part of Olsen's broad palette. The album, Olsen says, evolved from a casual post-concert conversation in which he asked trumpeter Bobby Shew and saxophoni ...

Oregon Jazz Scene (George Fendel)
Ok, I admit it. Any time I see the name Bobby Shew attached to a recording, my curiosity is aroused. And Shew’s lyrical trumpet and flugelhorn are featured here among other prime time soloists. Composer-flutist Jim Olsen has composed from a varied pallette, including classic swinging material, ballad delicacies, “out there” journeys, and even some ...

Jazz Weekly (George W. Harris)
Composer and arranger Jim Olsen brings together a richly textured and snazzily swinging big band which includes top notch soloists such as Bobby Shew/tp, Dick Oatts/sax and John Harmon/key. The eight originals mix toe tapping swing such as on “Illogical Conclusion” with lush ballads such as “Wistful,” with even a touch of modern sounds a la Stravin ...

Jazz Scan (Ric Bang)
Even though Jim Olsen lives and works in my neck of the woods, I wasn't the least bit familiar with him. He plays flute and sax, composes and arranges, and has been doing so for more than 30 years. He has been associated with the Eastman School of Music, Kansas University, the University of Denver, Indiana University and ensembles throughout the st ...