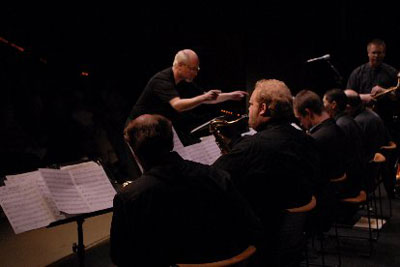 My first goal has always been to record original music that interests me and my second goal is to record it with great musicians whom I respect. Composer Jim Olsen has provided both.
- Dick Oatts

Jim Olsen has been a professional composer/arranger and performer (flute and saxophone) for over 30 years. His jazz compositions and arrangements have been performed and recorded by (among others) trumpeters Bobby Shew and Jim Rotondi, saxophonist Dick Oatts, the Eastman School of Music, Kansas University, University of Denver, Indiana University and Oregon jazz ensembles.

Olsen is the music director for Swing Shift, a Eugene big band that features some of the Willamette Valley's finest jazz musicians. He has conducted for and performed with such notable artists as pianist Kenny Drew, Jr., drummer Jeff Hamilton and trombonists Michael Davis and Andy Martin, as well as Shew, Rotondi and Oatts.

His extensive catalog of non-jazz compositions includes several highly-acclaimed works for percussion ensemble, concertos for saxophone and trumpet, a wide variety of chamber pieces and the score for "Exit Dying," a made-for-television movie.

Recent projects include a collaboration between the Eugene Concert Choir and Swing Shift, for which Olsen contributed 14 arrangements of jazz and pop standards; "Saying Goodbye," composed for the Springfield Academy of Arts and Academics; and several new arrangements commissioned by the Pleasant Hill High School Jazz Band.

Olsen is currently an artist in residence at the Springfield Academy of Arts and Academics, teaching composition and coaching chamber ensembles. He is also an adjunct saxophone instructor at Lane Community College and an active composer and clinician for area jazz ensembles.