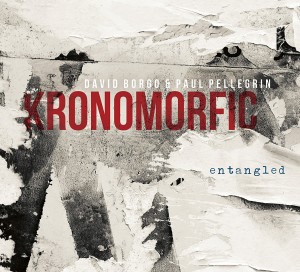 Kronomorfic synthesizes the ancient to the future...despite the inherent complexity of the music, the listener is left only to ponder the incredible beauty.
- All About Jazz

Led by saxophonist David Borgo and drummer Paul Pellegrin, San Diego's Kronomorfic explores polymetric time in remarkably innovative yet surprisingly approachable ways. The compositions traverse complex rhythmic dimensions through interlocking melodies with individual and collective improvisations among the ten West Coast luminaries. But in the end the music grooves, the melodies linger, and the solos burn.

Midwest Record (Chris Spector)
Big band space jazz. See how you can subgenre anything you want? Great sounds for contemplating either your navel or the universe, these are sounds that put the tea in the tea pad. ...

Wondering Sound (Dave Sumner)
Fascinating release from the tentet led by drummer Paul Pellegrin and David Borgo... Strangely alluring music, where melodic fragments flourish in the soil of odd meters and cross-currents of rhythms. This is music that seems like it should keep people out of reach, but it's so terrifically compelling that it makes friends with great ease... This i ...

Bop-N-Jazz (Brent Black)
Forward thinking, cutting edge yet wildly accessible ... an impressionistic journey that cuts through tradition ... a journey to a new land of rhythm and groove ... an organic deconstruction of lyrical time and space ... at times stunning! ...

babysue.com (LMNOP aka dONW7)
Kronomorfic is a San Diego-based modern jazz ensemble created and led by David Borgo (saxophone) and Paul Pellegrin (drums). According to the band's web site, the group is "dedicated to the exploration of polymetric time." Being the kinda ignorant folks that we are (not knowing the meaning of such a word)...we decided to look this one up. Accord ...

NBC San Diego (Robert Bush)
Borgo and Pellegrin create complex, multi-layered rhythmic phrases that overlap and interlock, and the result is music that engages both brain and viscera -- even though locating the "one" can be a harder mission than finding a parking space on Black Friday ... A dizzying vortex fed by the currents of 9 vs. 13 beats coalesce in "Cellar Door," w ...

All About Jazz / Italia (Maurizio Zerbo)
Armed with a solid musical education, saxophonist David Borgo and drummer Paul Pellegrin have put their volatile expressiveness in the service of a highly stratified concept in terms of rhythm and harmony. It is primarily Pellegrin's drumming style that's imprinted on the identity of Entangled. The polycentricity of his rhythmic drumming and ...

Cadence (Bill Donaldson)
Following up on its previous album, Micro Temporal Infundibula, Kronomorfic remains consistent in its adventures in polymetric concepts, and one suspects that concomitant differing - but not conflicting - metrical phrases will remain its signature quality on future albums. Fifty-seven years ago, jazz listeners were enraptured by Dave Brubeck's "Tak ...