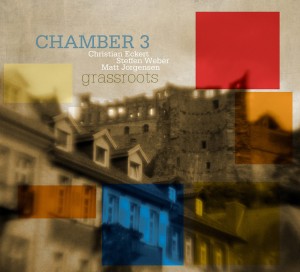 ...a particularly fine and very modern-sounding recording...
All About Jazz

Chamber 3 renews an ongoing international collaboration between Seattle drummer Matt Jorgensen and German guitarist Christian Ekert. Since meeting in New York at the New School for Jazz & Contemporary Music in the early '90s, they have continued their musical relationship through the years with multiple projects, including the organ trio NY3 and tours in the U.S. and Europe. Here they team with the dynamic German saxophonist Steffen Weber for explorations through compositions and musical sketches that highlight their collective group aesthetic. In addition to the 3, they are joined on "Grassroots" by Seattle bassist Phil Sparks.

All About Jazz (Dan McClenaghan)
4 1/2 STARS Do different geographies create different sounds? New York-hard and brassy, in your face and boppish; the Nordic countries - cool and reflective, spacious and dreamy; the American Midwest, Chicago and Detroit -- soulful and hip with a hard urban edge. This is, of course, a simplification, with exceptions flying all over the place, but d ...

Midwest Record (Chris Spector)
A dandy homage to 60s jazz as made by the cats that weren't selling out to pop and Beatles covers as a way to protect their turf. With the progressive edge in tact, the latest from this Seattle/German cross currant is right in the pocket for sitting back in your chair with a brandy and nodding your head appreciatorily without even knowing you are d ...

Jazz Weekly (George W Harris)
The quartet (!) of Chamber 3 consists of Christian Eckert/g, Steffen Weber/sax and Matt Jorgensen/dr along with "guest" Phil Sparks/b (as if he really weren't needed). Sparks sounds like he deserves have the band re-named to "Chamber 4" as he provides some rich pulse work along with Eckert on "Tattooed By Passion" and his thick line on "Enemy of In ...

Jazz Society of Oregon ()
The Seattle/German collective Chamber 3 seems to burst with urgency. Propelled by the Emerald City's Matt Jorgensen on drums, Grassroots is an explosive exercise in stormy postbop, with fine playing from all involved. Particularly inspired is German saxophonist Steffen Weber, who spins an inspiring blend of bebop and angular lines with a smooth, sm ...

Jazziz ()
Despite their moniker, Chamber 3 sounds more like an intimate jazz band than a chamber ensemble on Grassroots, their latest recording. And they utilize four musicians, not three. But these digressions are points in their favor, from a jazz lover's perspective. From the jump, the group offers a cool-jazz sound with a modern flavor. The compatible t ...