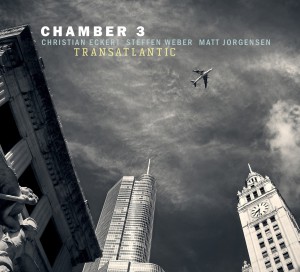 Chamber 3 can be compared to drummer Paul Motian's ECM Records with guitarist Bill Frisell and saxophonist Joe Lovano...intricate and full of nuanced surprises, and always such unusual, compelling and captivating grooves.
ALL ABOUT JAZZ

Chamber 3 is an ongoing international collaboration between Seattle drummer Matt Jorgensen and guitarist Christian Eckert and saxophonist Steffen Weber from Germany. Since meeting in New York at the New School for Jazz & Contemporary Music in the early '90s, Jorgensen and Eckert have continued their musical relationship through the years with multiple projects, including the organ trio NY3 and tours in the U.S. and Europe. Adding Steffen Weber's dynamic musical voice in 2014, the trio convenes in Southern Germany or the U.S. for explorations through compositions and musical sketches that highlight their mesmerizing group aesthetic. Seattle bassist Phil Sparks joins the trio on "Tranatlantic," a collection of ten originals plus a Weber arrangement of the classic "When You Wish Upon a Star" from Pinocchio.

Midwest Record (Chris Spector)
They pride themselves on not being in the same time zone but what I hear is a lot of 60s Detroit/New York leading edge jazz with that vibe that let's you know you better strap yourself in for some wild listening. Tasty stuff throughout, this trio doesn't let time zones or time stand in their way. Left leaning tastes will always welcome this sound ...

All About Jazz (Paul Rauch)
Chamber 3 began as a trio effort started by German guitarist Christian Eckert, and Seattle based drummer Matt Jorgensen, who forged a friendship while studying at the New School in New York in the early nineties. Over the years, they engaged in many projects and tours together, culminating in this project that includes German tenor saxophonist Stef ...