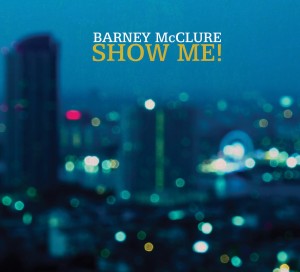 McClure in fact achieves something rare for an organist: He tames and civilizes the B3 beast and gives it airiness and sonic allure.
- The Davis Enterprise

Pianist/composer/arranger, and sometime politician, Barney McClure has pretty much done it all over the course of a five decade career. For a new twist though, he teamed with master arranger Phil Kelly to create an albums worth of cutting-edge big band charts to feature Barney and his Hammond B-3 Organ. With the esteemed band from Central Washington University, Barney & Phil have created a dynamic and deeply swinging big band recording.

Reviews of Show Me!

Midwest Record (Chris Spector)
C'mon, how often do people cover Pete Christlieb? And the cover is generated by a B3 ace to boot? Pay attention. Long time B3 jazzbo McClure teams up with a university big band for a swinging date of old school big band done just the way you like it. These kids can play and McClure tames that wild cat of a B3 making it heel to his touch and com ...

All About Jazz (Jack Bowers)
5-STARS! While organist Barney McClure receives top billing on this exhilarating new album, he is happy to share it, for good reason, with the superlative Central Washington University Jazz Band from Ellensburg. As McClure asserts in the liner notes, "I was no more than a lucky rider on the bus." Well, a bit more than that, Barney, as your dynam ...

Jazz Society of Oregon (George Fendel)
Barney McClure, a former mayor of Port Townsend, Washington, hasn't been heard from in quite a spell. So it's a treat to welcome him back in a solid setting with the University of Central Washington Jazz Band. Everyone cooks up a storm on several originals and standards such as "Willow Weep For Me," "Slow Boat To China" and the title tune. An album ...

Ancient Victorys (Chris Lunn)
My admiration and belief in McClure as a musician, composer, and interpreter goes back to the mid 70's when he brought a band, Featherstone, into Open Mike, and I started booking them immediately. At our place, Victory Hall on 6th in Tacoma, we had a battered old upright that McClure would play before the show (where he used an electric keyboard) ...

Jazz Weekly (George W. Harris)
Barney McClure takes his Hammond B3 and pits it up against a hard swinging big band to a 6 gun-shoot-out of a draw here with some fun and hard hitting charts of originals and standards. You get some shuffling boogie on "Hookin' It" along with Owen Wvans' alto, while the team swaggers on "Slow Boat to China" along with McClure's B3 busting up the ke ...

Improvijazzation Nation (Rotcod Zzaj)
Long-time readers of this ‘zine will know that nothing gets me more excited than great organ playing, & Barney's Hammond B3 is certainly among the best I've heard in the last decade, especially when paired with the Central Washington University Big Band… it's not a combination I hear often (most organ-related submissions here are quartets or qu ...