This is some altogether outstanding bluesy, nightclub, up-too-date jazz with enough blues-club Hammond built in to give the listener some religion no matter how they walked in the door.
Adam Greenberg, All Music Guide

With occasional side trips into local and state politics, pianist/organist Barney McClure always maintained a powerful musical career performing with some of jazz's most distinguished artists. Probably better known as a pianist, McClure's Hammond B-3 work has been his secret weapon where he's been a favorite of guitarists like Herb Ellis, Howard Roberts, Joe Pass, Emily Remler and Cal Collins. Now, McClure teams with the dynamic, Oregon-based guitarist Mike Denny where they explore originals they developed over the last year of working together. Joined by drummer Kevin Congleton, the group takes a tasty B-3 trio musical journey.

All Music Guide (Adam Greenberg)
Organist (also pianist, but not on this album) Barney McClure pumps out an excellent set in combination with guitarist Mike Denny, with some reference to the great Jimmy Smith/Wes Montgomery combinations of the past (though more in spirit than in composition). This is Northwest jazz with an added kick from the small Alaskan contingent of the scene. ...

The Davis Enterprise (Tomas Conrad)
On his home turf, Barney McClure is known (in ascending order) as an author (There Is No Such Thing as a Mistake), politician (he has been mayor of Port Townsend, Wash., and served a term in the Washington State Legislature), and one of the Pacific Northwest's best piano players. It turns out that he is also a fluent practitioner of the Hammond B3, ...

Cadence, Oct-Dec, 2007 (Larry Hollis)
Out of the Pacific Northwest, Barney McClure is an organist of a different stripe and his trio is much more in the traditional pocket which should delight hard core mainline Hammond heads. Apparent in McClure's annotation is his high regard and respect for guitarist Mike Denny. A recent arrival to the trio, Denny teaches at the University of Oregon ... 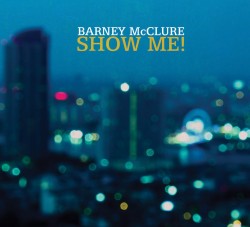