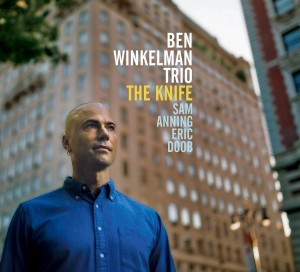 ...the trio captures the ear, providing thrilling evidence of a stellar contemporary trio to rank among the best...
All About Jazz

"The Knife" is pianist Ben Winkelman's fourth trio recording as a leader, but his first since moving to New York from Melbourne in 2010. Featuring thirteen of his original compositions, Winkelman, bassist Sam Anning, and drummer Eric Doob explore their diverse musical interests, including Cuban and Brazilian music and odd meter claves.

"...the genuine article, a determined crossbreeder of styles whose music is inventive and often surprising. In the era of the postmodern piano trio, Winkelman's already claimed his place at the table." - Cadence.

Reviews of The Knife

Midwest Record (Chris Spector)
His first set as a leader since moving from Oz to the Big Apple, Winkelman shows his penchant for coloring outside the lines with grace and the kind of finesse that shows this is much more than an exercise in creativity for the sake of creativity. With odd meters and unexpected switchbacks carefully made to look like casual toss offs, this piano j ...

Jazz Weekly (George W. Harris)
Pianist Ben Winkelman trios it up with Sam Anning/b and Eric Doob/dr for a Baker's Dozen collection of originals. Winkelman has a warm and classy touch, showing deftness and thoughtfulness on " While I Sleep" and "Westbury" as well as strength on "The Schlep" and title track. There's lots of interplay and clever conversations between Doob and Winke ...

PBS, Victoria, Australia (Owen McKern)
For any who had the pleasure of seeing and hearing Ben Winkelman perform in and around Melbourne in the early 2000's it would seem inevitable that he'd uproot and move himself to jazz music's epicenter in New York. It was equally obvious that Winkelman's composition and approach would continue to draw from myriad stylistic and cultural stimuli rath ...

The Australian (John McBeath)
Ex-Melbourne pianist Ben Winkelman, New York based since 2010, has just released his fourth trio album, this one recorded in, and inspired by New York. His first, Stomps, Pieces & Variations appeared on Jazzhead in 2005. Winkelman's playing has certainly evolved since he moved to the US, but he remains interested in Afro-Cuban, Brazilian, and Klezm ...

Loudmouth: The Music Trust E-Zine (Australia) (Eugene Ball)
There is a school of thought that suggests that artists create in order to better understand the world in which they live. From this perspective, music can be viewed as a way of knowing; a way of creating sense and order in the musician's world. Though this might seem an overly profound idea, it is such a normalised aspect of a musician's life that ...