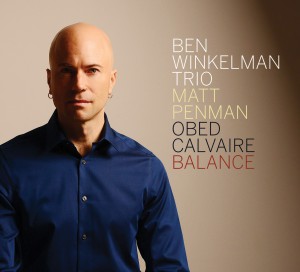 The intellectual meets the intuitive by design...perpetually seeking a state of equilibrium, approach joyful swing, hard-hitting rock and chamber-like inventions as one big, interconnected thing of beauty.
DOWNBEAT

Over his four albums as a leader, New York pianist Ben Winkelman has been developing his concept for the piano trio, seeking to strike an elusive balance between composition and improvisation, planning and spontaneity, the intellectual and the intuitive, all with his steadily working group. His featuring of the three instruments, not only as soloists, but as if they were a small orchestra, gave them each integral parts in the compositions expanding the overall voice of the trio. For "Balance," his fifth recording, Winkelman went into Sear Sound in New York with drummer Obed Calvaire and bassist Matt Penman, artists he highly respected but had yet to perform with, to add new energy and joyful unforeseen outcomes as they explore his ongoing interests in Afro-Cuban, gospel and classical music, but filtered through their collective jazz perspective.

JazzTrail (FILIPE FREITAS)
Melbourne-raised, New York-based pianist/composer Ben Winkelman, an adept of the trio format, odd meters, and Latin scents, teams up for the first time with bassist Matt Penman and drummer Obed Calvaire on his fifth album as a leader. Balancing composition and improvisation, he crosses the lines between Latin, jazz, and classical, bestowing a di ...

Downbeat (Ed Enright)
EDITOR'S PICK With the release of his sixth album as a leader, Australian-born, New York-based pianist Ben Winkelman continues to develop his concept of a piano trio whose primary artistic goal is to strike a balance between composition and improvisation. Bassist Matt Penman and drummer Obed Calvaire - both of whom never had played with Winkelman ...

All About Jazz (Dan Bilawsky)
Jazz, much like life, is an art of balance, a forever dance on the scales which keep our sanity and existence in check. Form must always reckon with freedom, scripts and spontaneity are bound by mutual understanding, and intellect blossoms truest as it holds the heart in high regard. Only in a state of relative equilibrium can the music find its re ...

Musical Memoirs (Dee Dee McNeil )
Pianist/composer, Ben Winkelman was born in Eugene, Oregon, but grew up in Melbourne, Australia. He's been living and working in New York City since 2010. This is his fifth album release and his goal is to find balance between composition and improvisation; planning and spontaneity. His music is wrapped in the originality of his compositions as he ...

Jazz Weekly (George W. Harris)
The title of this album fits well, as pianist Ben Winkelman creates a symbiotic balance between interplay and soloing with bassist Matt Penman and drummer Obed Calvaire on this ten song collection of originals plus a cover. Of the latter, Thelonious Monk's "Bye-Ya" is a crisp and spacious rendition, while the rest of the pieces reflect good listeni ...

All About Jazz (GENO THACKARA )
Ben Winkelman's fascinating trajectory has taken him from Australia to New York with a most stimulating detour through Cuba. With world-spanning roots spread over all those territories, his approach to the keys insistently leans bright and rhythmic, which is an absolute delight for listeners who enjoy their tropical sunshine with a hint of the tang ...

The Australian (Eric Myers)
(4 stars) Pianist Ben Winkelman's fifth album is so good that, ironically, its overwhelming brilliance may limit its appeal. It is so innovative, and played with such power, that the listener is left open-mouthed. Still, it creates a mystique which I for one find fascinating. Winkelman, imbued with a restless musical intelligence and an impeccable ...

Midwest Record (Chris Spector)
The jazz piano man that likes odd meters is back with his new set of switch backs that leave you guessing where it's improv or composed. The kind of cat that keeps you on your toes but doesn't indulge in art for art's sake, he tickles the ear as well as the fancy with this set that just let's the music do what it will----and it always does the righ ...

O's Place (D. Oscar Groomes)
Ben Winkelman is an Aussie jazz pianist who found himself in New York on the jazz scene with a strong penchant for Modern Jazz with Latin, Afro-Cuban flavors. He leads a strong trio with bassist Matt Penman and Obed Calvaire on drums. All of the music is original except a cool arrangement of Monk's "Bye-Ya". There's a touch of gospel on "Fala Baixi ...