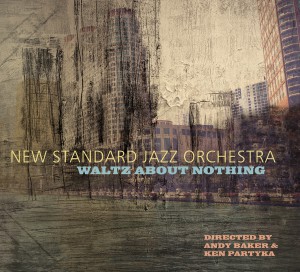 Since its inception in 2013, the New Standard Jazz Orchestra has emerged as a serious musical force in Chicago, one with a voice all its own. Co-led by saxophonist Ken Partyka and trombonist Andy Baker, the band is filled with some of Chicago's finest musicians, composers and arrangers, several who provide the majority of the band's repertoire. Through their monthly residency at the famed Jazz Showcase, NSJO's arrangers mine the ensemble for subtle textures and colors, starting out simply and building in complexity, drawing on musical devices that range beyond the typical as they establish rich backdrops for solos by world-class improvisers such as John Wojciecowski, Marquis Hill, Mark Colby and Tom Garling.

Reviews of Waltz About Nothing

Midwest Review (Chris Spector)
Chicago's once thriving commercial music scene gave local jazzbos the stability to do whatever they wanted at night and not worry about putting food on the table. There was some great jazz going around in those days. This Chicago aggregation shows the commercials might be gone but the passion for stellar big band jazz remains. Never sounding corny ...

Cadence (Robert D. Rusch)
This 17­piece big band offers tight modern arrangements over 11 tracks [71:32]; with 6 originals from band members and 5 from outside the band like "Milestones," "Close To You" and "Star Crossed Lovers". While I don't find any identifiable footprint to the band sound (perhaps a slight touch of Kenton) what I do find, besides its tightness, is a fi ...

All About Jazz (Jack Bowers)
Any orchestra that professes to establish a new standard had better be able to back that up. Happily for the listener, on its debut recording, Waltz About Nothing, Chicago's New Standard Jazz Orchestra can—and does. In a little more than two years, the NSJO has arisen as a worthy successor to one of the more exemplary ensembles ever to grace the ...

Chicago Jazz Magazine (Hrayr Attarian)
The creative, 16-piece New Standard Jazz Orchestra (NSJO) is a cohesive ensemble made up of some of the most brilliant musicians in Chicago. Under the co-direction of trombonist Andy Baker and saxophonist Ken Partyka, there is a sophisticated style and a cinematic sound, both of which are well represented on the debut release, Waltz About Nothing. ...

Downbeat (Michael Jackson)
**** Expat British trombonist Andy Baker and saxophonist Ken Partyka assembled this top-tier big band as a labor of love outside their diverse professional activities. Baker fell in love with his subsequent wife and the city of Chicago back in 2001, when he jumped ship from the excellent U.K. swing band The Ray Gelato Giants and became an in-deman ...

Jazz Journal (Dave Gelly)
A first-class modern jazz orchestra, not in New York or LA but, perhaps surprisingly, Chicago. This 17-piece band of young professionals has everything - drive, precision, excellent soloists and the kind of ferocity in its approach that only comes with the flush of youth. Eight of the 11 numbers are originals by band members, and they really are or ...