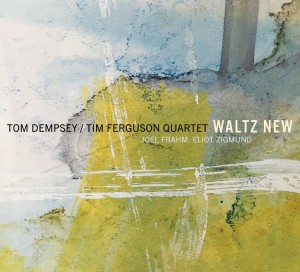 Paying tribute to the profound effect Jim Hall had on their music, guitarist Tom Dempsey and bassist Tim Ferguson's fourth album together approaches six of Hall's classic compositions, and several standards that the guitarist made distinctively his own over a storied career. Featuring saxophonist Joel Frahm and drummer Eliot Zigmund, the quartet explores "All Across The City," "Something Special" and the title track, all by Hall, and their take on "Alone Together," "All the Things You Are," and "Skylark," as they give a nod to Hall's contributions to modern jazz and the impact of his enduring legacy.

Midwest Record (Chris Spector)
There's a couple of interesting things going on here all at once. First up, this set is a tribute to Jim Hall and his influence on modern jazz. Second up, it sounds like a smooth jazz date in an acoustic setting where it hasn't been declawed of it's swing and drive. Is it a winner? Only throughout. A nice little text book on how it's done righ ...

Jazz Weekly (George W. Harris)
Guitarist Tom Dempsey and bassist Tim Ferguson deliver a tribute to the cool tones and textures of Jim Hall on this seductive session. Tenor saxist Joel Frahm and drummer Eliot Zigmund round out the team as they mix originals with Hall compositions and a couple standards. Of the latter, Frahm is warm and lyrical on Skylark" and the team bounces wit ...

Cadence (Robert Rusch)
TOM DEMPSEY [gtr] and TIM FERGUSON [b] have been recording together almost 20 years and WALTZ NEW [OA2 Records 22140] is their latest collaboration. This 6/16/15 recording is, among other things, a tribute to their friend Jim Hall and of the 11 tracks, 6 are Hall compositions, with the rest standards and one Dempsey original. This is, I believe, th ...

New York City Jazz Record (Marilyn Lester)
Like a good marriage, when two musicians achieve a meeting of the minds, a certain harmony occurs, yielding work embodying that happy synchrony. Such is the case with Waltz New. Guitarist Tom Dempsey and bassist Tim Ferguson have been playing together for more than 20 years and this is their fourth album, a tribute to the late Jim Hall (1930-2013). ...