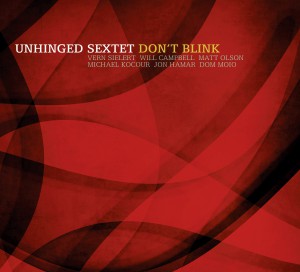 ...one sample of this album is enough to dispel any thoughts of a musical group that is coming apart, unhinged in any way. Far from the truth, as the brilliant play and sophisticated compositions from the band will surely illuminate.
ALL ABOUT JAZZ

Comprised of six performers and composers, all with stellar resumes but based in far-reaching corners of the country, the members of the Unhinged Sextet were originally drawn together through long-standing mutual associations. After gathering in Arizona for their debut, 2015's Clarity, they were compelled to further explore the writing, emotions, and aesthetic the grouping inspired. The resulting performance of eight original compositions displays the warm regard the players have for each other's talents and a collective group dynamic clearly moving forward.

"...the elegant performances and imaginative writing make for a cohesive and uniformly enjoyable listening experience...sophisticated and charming jazz that also has a much-needed common touch." - Chicago Jazz Magazine

Midwest Record (Chris Spector)
The consensus is that the only reason to call this crew Unhinged is because they are in different parts of the country and convene once a year to record. This is too much of an ensemble to be unhinged so if you are looking for some pots and pans music, look elsewhere. This is a swinging bunch of jazzbos that show their impressive debut wasn't th ...

All About Jazz (Mark Sullivan)
4-STARS When the members of the collective Unhinged Sextet gathered to record their first album Clarity (OA2 Records, 2015) it was the first time they had played together, despite long-standing mutual associations. Don't Blink continues to demonstrate the chemistry that characterized their first meeting. Once again the music is all original, with ...

Cadence Magazine (Robert Rusch)
DON'T BLINK is the name of the latest recording by the UNHINGED SEXTET [Vern Sielert-tpt/flg, Will Campbell-as, Matt Olson-ts, Michael Kocour-p, Jon Hamar-b, Dom Moio-drm]. Recorded 10/7&8/16, here are 8 originals by different members of the group except Moio. This is a group playing ballads and hard driving hard bop with solid charts and harmoniz ...

All About Jazz (David A. Orthmann)
Unhinged Sextet is a strong candidate for the best band you'll never hear in a live performance. The members of this cooperative ensemble are spread out across the country, earning their daily bread by training the next generation of musicians, with an emphasis on jazz studies, at various universities. They join forces for brief periods in between ...

Jazz Journal (London) (Derek Ansell)
4-Stars This band is made up of six musician/composers from different corners of the United States who have come together to play music in the style they love for this their second CD. They play in the highly durable hard bop style that came to full fruition in the 1960s. The opening track Don't Blink immediately demonstrates their cohesive unity, ...

Jazziz (Michael Roberts)
Unhinged Sextet's moniker suggests a crew of loons willing to plunge off any creative cliff they encounter, good sense be damned. But Don't Blink is hardly an album lacking sanity. Rather than forging into previously unexplored territory or shattering long-held compositional paradigms, the combo has crafted a satisfying collection of tunes inspired ...