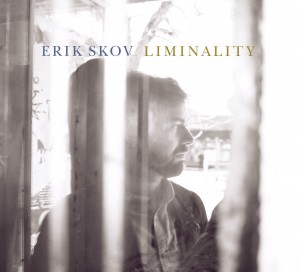 Delighting in some Zen ambiguity that works it's way into the grooves, this is music of discovery that never signals it's left turns ahead of time but keeps you paying rapt attention...
Midwest Record

On Liminality, Chicago guitarist Erik Skov creates a striking debut, exploring a far-reaching collection of original compositions with his six-piece ensemble made up of some of Chicago's more interesting improvising musicians, including saxophonist Dustin Laurenzi, trumpeter Emily Kuhn, trombonist Euan Edmonds, bassist Kitt Lyles, and drummer Gustavo Cortinas. Referring here to the threshold between stages of a transformative process, Liminality celebrates that zone where creative discovery and possibility can thrive, through long-form compositions rife with unfolding melodies, elegiac set pieces, or straight-ahead romps.

Midwest Record (Chris Spector)
A Chicago guitarist leads a local crew on a set of art leaning jazz that moves and breathes rather than makes you labor over it. Delighting in some Zen ambiguity that works it's way into the grooves, this is music of discovery that never signals it's left turns ahead of time but keeps you paying rapt attention for when they turn up. Extended leng ...

Jazz Weekly (George W. Harris)
Guitarist Erik Skov composes all of the tunes for the front line of Emily Kuhn/tp, Dustin L aurenzi/ts, Euan Edmonds and the rhythm section of Kitt Lyles/b and Gustavo Cortinas/dr. Skov's got an elegant sound that is lovely as he hovers through the horns and Lyles' line on "Summer Meditation" and gives dark reflections as the horns sway on the refl ...

Music Frames (Netherlands) (Mattie Poels)
Beautiful debut album by American guitarist (and banjo player) Erik Skov, who plays a kind of landscape jazz with his sextet Liminality . In his self-written compositions we hear a range of beautiful instrument combinations with which he creates splendid sound colors. Jazz guitarist and composer Erik Skov works in the Chicago area. He studied at ...

All About Jazz (Jack Bowers)
Liminality is defined as "occupying a position at, or on both sides of, a boundary or threshold." Guitarist Erik Skov had a good idea: infuse his debut album with a certain amount of liminality (ambivalence) in the form of eight long-form compositions designed to lend his able sextet weighty meat on which to chew. While Skov's essentially laid-b ...