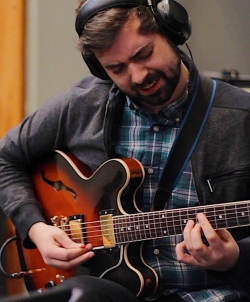 Delighting in some Zen ambiguity that works its way into the grooves, this is music of discovery that never signals it's left turns ahead of time but keeps you paying rapt attention...
MIDWEST RECORD

Guitarist, educator, and composer, Erik Skov has been living and performing in Chicago for over a decade. A graduate of North Central College in jazz and anthropology, and a Masters in jazz from Northwestern University, Skov has established himself as an up and coming new jazz guitar voice in a city with an abundantly rich jazz & blues guitar heritage. Skov has worked with top musicians and composers in the jazz and classical worlds including Victor Goines, Ryan Kisor, Jonathan Newman, Derek Bremel, Mallory Thompson, Ben Bolter, Frank Caruso, Charleen Brooks, Chris Madsen, and many others.

On "Liminality," Skov creates a striking debut, exploring a far-reaching collection of original compositions with his six-piece ensemble made up of some of Chicago's more interesting improvising musicians, including saxophonist Dustin Laurenzi, trumpeter Emily Kuhn, trombonist Euan Edmonds, bassist Kitt Lyles, and drummer Gustavo Cortinas. Referring here to the threshold between stages of a transformative process, "Liminality" celebrates that zone where creative discovery and possibility can thrive, through long-form compositions rife with unfolding melodies, elegiac set pieces, or straight-ahead romps.