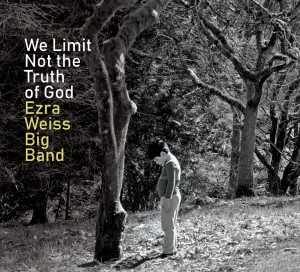 Portland-based composer/pianist Ezra Weiss has composed and arranged for many albums, musicals and multi-media events and released six albums as a bandleader over the last 16 years, but had yet to present his own large ensemble recording. We Limit Not the Truth of God marks that debut while offering a timely, impassioned statement concerning the times we live in, addressed to his young children. Through emotionally expressive compositions performed by a stellar ensemble, with his own narration interspersed between, it's both a loving message passed down from father to children as well as a profound and deeply felt plea for togetherness and empathy. The brilliant 17-piece big band includes such distinctive soloists as saxophonists John Nastos, Rob Davis, Renato Caranto and Mieke Bruggeman; trumpeters Farnell Newton, Derek Sims and Thomas Barber; trombonists Stan Bock and Jeff Uusitalo; and flutist John Savage. The album was recorded live in the resonant Alberta Abbey, a historic church turned performance space in Portland, Oregon.

Reviews of We Limit Not the Truth of God

Jazziz (Editor)
New Music Monday Feature "Obergefell" is a track from composer/bandleader Ezra Weiss' big band album debut, We Limit Not the Truth of God. The LP features a 17-piece band of first-call musicians and is an impassioned suite addressed to Weiss' young children that attempts to make sense of a divided world. "Obergefell" is one of its most celebratory ...

Jazz in Europe (Andrew Read)
I've received many CD's recently that have some form of social commentary as part of their concept but none so "In your face" as the new album from Portland based composer/arranger Ezra Weiss. Titled "We Limit Not the Truth of God" the album contains 11 tracks and is in effect a musical time capsule for Weiss's young children. The following text ...

Audiophile Audition (Jeff Krow)
(I am writing this review one day after the mass shootings in El Paso and Dayton) As we experience one of the most wrenching political and social periods in the new millennium, it is often up to our musical artists to fully express the outrage and disbelief necessary to inspire the changes needed, to give us any hope of raising our children in a ...

The Jazz Owl (Travis Rogers, Jr.)
Ezra Weiss describes himself as "religiously agnostic but culturally Jewish." If only we could all be courageous enough to admit that, religiously, we just don't know then perhaps we could speak across those walls that keep trying to be built between us. Still, Ezra is musical director at a Christian church. He's not hedging his bet, mind you, ...

Jazz Weekly (George W Harris)
A collection of messages from a father to his children is delivered musically by composer/conductor Ezra Weiss. Heartfelt chats about politics, policy and the future are interspersed and woven into the Coplandesque arrangements delivered by the 17 piece unit. Serene horns frame Franell Newton's trumpet during "Fanfare for a Newborn" with Mike Brug ...

Jazz Journal (London) (Brian Morton)
This started out as a message to Weiss's children, something to help them face the challenges ahead. Then the 2016 election happened, the "alternative fact" entered political discourse, and the message took a more sombre turn as the narrated "I don't mean to be a downer" perhaps suggests. The project title comes from a hymn by the Congregational ...

All About Jazz (Jack Bowers)
Composer / arranger Ezra Weiss's debut big-band recording, We Limit Not the Truth of God, is actually a suite written for his two young children to help them understand and embrace the often confusing and chaotic world in which we live. It is thus entirely appropriate that the album was recorded (with an audience) in a church, Portland (OR)'s histo ...

All About Jazz (Jerome Wilson)
4.5 STARS In 2015 Ezra Weiss began to compose a suite that he intended would be a cautiously optimistic message to his young children about the world they were living in and the challenges and promise they would face as they grew up. By the time this music was completed and recorded in December 2018, its mood and message had changed dramatically. ...