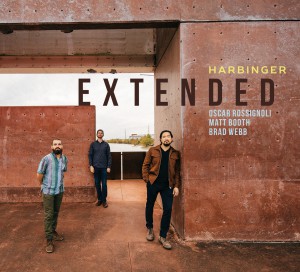 These three musicians sound as if they were destined to play with each other. Their interactions, improvisations and the seamless way their compositions flow from cut to cut feel instinctive. Extended exemplifies creativity.
Geraldine Wyckoff, Offbeat

Meeting in the storied musical environs of New Orleans, Honduran pianist Oscar Rossignoli, Pittsburg bassist Matt Booth and Lousiana-bred drummer Brad Webb, bring their varied pasts together in the development of an expansive group identity through their distinctive writing and dynamic improvisational reflexes. With each contributing and structuring their compositions with awareness of the other's musical personalities, the feeling of a collective consciousness invigorates. From the cool groove and fleet soloing from Rossignoli on his own title track, to the galloping "Connie," or the delicate and open-aired "Loft Spaces," Extended creates a rich, sculpted landscape, much in the tradition of modern piano trios like E.S.T., but rooted firmly in the musical soil of their adopted hometown.

Midwest Record (Chris Spector)
In which we find the answer to the question of whether a 'Nawlins piano trio can show New York angularity without dipping into second line territory. Looks like the answer is yes. Without going all loft on us, this trio has great simpatico that keeps them on point instead of wandering off but they retain their sense of freedom as well. Finding ...

OffBeat Magazine (Geraldine Wyckoff)
Pianist Oscar Rossignoli, bassist Matt Booth and drummer Brad Webb make up the brilliant contemporary jazz trio, Extended. These talented, up-and-coming musicians stunned with the ensemble's 2017 self-titled debut, and more than live up to those artistic promises on Harbinger. The all-original selections, each individually penned by the members ...

Jazz Weekly (George W. Harris)
Every era has bands and artists that create seismic shifts in style. The Bad Plus came around in the 1990s to formulate a new type of piano trio, going away from the "mow, blow and go" of standards to a more cohesive unit. Here's a trio that drinks deeply from these waters. The trio of Oscar Rossignoli/p, Matt Booth/b and Brad Webb/dr converse b ...

WTJU (Dave Rogers)
This trio features Oscar Rossignoli (piano), Matt Booth (bass) and Brad Webb (drums) and they seem to be extensions of each other. Their interactions and blended combinations are amazing. Booth composed three, Rossignoli two and Webb five songs everything connects perfectly. This is a quiet and beautiful set throughout. They are now located in New ...