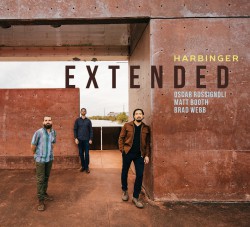 Pianist Oscar Rossignoli, bassist Matt Booth and drummer Brad Webb make up the brilliant contemporary jazz trio, Extended. These talented, up-and-coming musicians stunned with the ensemble's 2017 self-titled debut, and more than live up to those artistic promises on Harbinger.

The all-original selections, each individually penned by the members of the trio, stand as a free-flowing study in the power of dynamics that is perhaps best illustrated on Webb's "Connie." The simplicity of the bass and the chord structure of the piano become a passionate extravagance by the entire ensemble. The mood then becomes melancholy in its emptiness and almost hymnal with Rossignoli's pronounced, deliberate repetitive phrasing. At last it bursts into an exuberant celebration that becomes resolved by the softness of release.

Though swing isn't a part of these guys' game, rhythm certainly is. Rossignoli suggests a Latin tinge rhythmically and melodically on another composition by Webb, "Hand-Written Letters," on which Booth's beautifully-recorded bass plays a dominant role. Like so many of the tunes, this number builds in intensity with Rossignoli's insistent piano urging a forward motion. Webb's drums wildly take up the call.

Bassist Booth offers the first cut, "Sweet Teeth," that welcomes listeners with a touch of familiarity. Rossignoli's two-handed dexterity has him in a way accompanying himself with the rhythm of his left hand providing the bottom for his elegantly vivacious single note runs that emanate from the upper end of the keyboard. The pianist's own contribution, the title cut, "Harbinger" displays his high regard for melody and the gift of classical training.

Harbinger manifests superb musicianship creatively employed to produce a highly individualized yet collective artistic endeavor that is a privilege to experience.

Other Reviews of
"Harbinger":