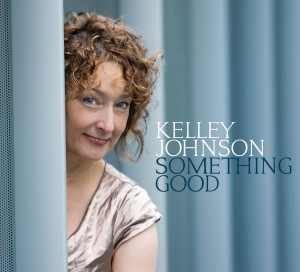 Vocalist Kelley Johnson's glistening sound stands out for its emphatic clarity and direct delivery. On "Something Good," her 5th recording, Kelley presents songs as soundscapes, from lesser-heard repertoire such as Sondheim's "Anyone Can Whistle," or The Carpenters' "Goodbye to Love," to reimaginings of golden standards, Cole Porter's "You Do Something to Me," or "Unforgettable." With inventive arrangements by Johnson and John Hansen, her pianist of the last two decades, her band of Hansen, bassist Michael Glynn, NY drummer Kendrick Scott and special guest, Jay Thomas, delivers a fresh outlook, adding depth and expansiveness to this already substantial musical collection. "Kelley Johnson pulls the blues out of thin air. The deep feeling with which she interprets guarantees a profound reception. It's genuine. Johnson is a true communicator." - All About Jazz.

Reviews of Something Good

The Jazz Page (D. Glenn Daniels)
Kelley Johnson poses a sophisticated, well-honed voice and delivery that makes listening a true pleasure. Something Good, the singer's fifth recording, is a wonderful showcase of her talents vocally and as an arranger. Taking on numerous selections from the Great American Songbook, Johnson's fantastic way with a song, which cannot be understated, i ...

Seattle Times (Paul de Barros)
Album releases by Greta Matassa and Kelley Johnson show two Seattle jazz singers at the top of their game Two artists indelibly linked to Tula's Restaurant & Jazz Club, which is closing at the end of this month, are Seattle's best female jazz singers — Greta Matassa and Kelley Johnson — who both celebrated the release of new albums at the cl ...

Musical Memoirs (Dee Dee McNeil)
Vocalist Kelley Johnson chooses songs that are golden, with lyrics that sparkle like diamonds. She opens with a Stephen Sondheim composition, "Anyone Can Whistle." The whistle ballad turns into a scat, and Ms. Johnson shows how smoothly she can transition from storyteller to jazzy scat singer. Surprisingly, she does know how to whistle and blows a ...

Jazz Weekly (George W. Harris)
Kelley Johnson sings with style and confidence, even whistling a bit, as she gives warm reads of standards with John Hansen/p, Michael Glynn/b, Kendrick Scott/dr and guest Jay Thomas on sax and trumpet. She's dreamy with Hansen on the clear "Anyone Can Whistle" and genteel in soft form with him and Glynn on the dainty title track, while sly during ...

Midwest Record (Chris Spector)
We always enjoy a set of the good old songs but we enjoy them more when presented by someone that really gets inside the lyric and music and brings on gallons of special sauce making the tunes their own no matter how much diversity there is in the song stack. Putting everything in sharp perspective and framing it all perfectly, this classic feelin ...

Lemonwire (Dodie Miller-Gould)
Kelley Johnson continues her stride in the world of jazz. Her fifth album, "Something Good," is a page out of the Great American Songbook, but it is a page uniquely written by Johnson. Johnson's work has been lauded for its rich sound. Downbeat magazine referred to Johnson's rhythm section as "sailing, buoyant" and gave accolades for her "bright ...

C. Michael Bailey Tumblelog (C. Michael Bailey)
Kelley Johnson's Something Good is a jazz vocals offering that brims with genuine talent presented with laughter and authentic good cheer. It helps that Johnson is an excellent singer, possessing that conversational quality in her delivery that makes a song seem like a story over coffee. Supported by a piano trio augmented with a horn (tenor and ...

JW Vibe (Jonathan Widran)
To paraphrase the title from a whimsical British Invasion hit co-written by Carole King, Seattle based vocal interpreter and sassy scatter extraordinaire Kelley Johnson is truly into Something Good on her fifth album – which also marks the start of her third decade as a recording artist. More than simply an exquisitely arranged set of slightly ...

Amazon (Grady Harp)
5-STARS Consummate jazz vocalist Kelley Johnson offers her finest recorded performance to date – a recording that focuses on intimate jazz interpretations of favorites and makes them completely fresh and compelling. Or as others have said, ‘She understands the music from the inside out, and with her spot-on phrasing and silky, rich timbre, sh ...

Jazz Chill (Editor)
There are many vocalists with lovely voices who mine the Great American Songbook for material; however, very few have the depth and jazz chops of KELLEY JOHNSON. A vocalist and arranger, Johnson doesn't rehash familiar standards. She understands the music from the inside out, and with her spot-on phrasing and silky, rich timbre, she is certainly on ...

Culture Jazz (France) (Yves Dorison)
Go! Another singer we did not know. Kelley Johnson has a precise phrasing, a silky tone and a crystalline diction. It's already a lot, which does not prevent it from scatter with a certain originality. Nothing is ostentatious in this disc. The music is lived from the inside. The reinterpretations that the singer dares are personal and, above all, i ...

Jersey Jazz (Joe Lang)
Something Good is the fifth album from Seattle-based vocalist KELLEY JOHNSON. Given that she made her first album in 1998, it is a sad commentary on the current music scene that a vocalist as good as Johnson has had such a limited recorded output. This ten-song program finds her with backing from pianist John Hansen, bassist Michael Glynn and dru ...

Cadence Magazine (Robert Rusch)
Something Good is the newest CD from vocalist Kelley Johnson.  This is an exceptional recording. She selected ten interesting tunes by Sondheim, Porter, Shearing, Bernstein, Mat Matthews and the like. Her performances are meaningful, unhackneyed and sung with style. Lovingly backed by John Hansen [p], Michael Glynn [b], Kendrick Scott [drm] and Ja ...

Keys and Chords (Belgium) (Patrick Van de Wiele )
4-Stars The American jazz singer Kelley Johnson has twice been elected as international musical ambassador, and that since her debut 'Make Someone Happy' (1998) with Fred Hersch. She grew up in the Midwest of the USA, and her mother flooded her with music from the sixties, seventies, R&B, country, jazz and especially blues. When the family moved t ...

Earshot Jazz (Ian Gwin)
Consisting of mostly lesser-known standards and a few re-tuned classics, vocalist Kelley Johnson's Something Good lives up to its title with a set of vocalist-trio arrangements that offer crisp, clean lines. Listeners coming to the recording by chance, invited in by its warmth and atmosphere, might notice the hints of laughter and the clink of glas ...

Music Man Blog (Robert Nicosia)
Vocalist and Arranger Kelley Johnson has released her 5th CD, "Something Good". In this new CD, Kelley has chosen 10 familiar standards where she applied her own unique interpretation. I have said many times that one of the tests I like to use when evaluating a new performer is how they approach a tried and true standard. A lot of vocalists I hear ...

In a Blue Mood (Ron Weinstock )
There is a warmth and a genial, sensual quality to Kelley Johnson's vocals. Her latest CD, "Something Good," has her wonderful interpretations of ten musical gems backed by a trio, including her husband, John Hansen on piano, Michael Glynn on bass, and Kendrick Scott on piano. Jay Thomas adds his horn (saxophone or trumpet to three songs. She ha ...

Jazz Journal (London) (Bruce Crowther)
A native of Milwaukee, Kelley Johnson studied at the Wisconsin Conservatory of Music and also privately with Mark Murphy and Jessie Hauck. Further studies at the University of Washington, Seattle, led to her becoming resident in the Pacific Northwest. She was also winner of the 2002 International Jazzconnect Jazz Vocal Competition. In addition to p ...