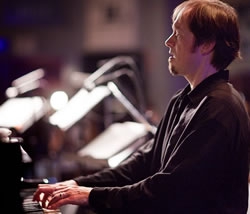 John Hansen is of that rarest of breeds: An attentive, discreetly inventive accompanist.
- Christopher Delaurenti, The Stranger

John Hansen is regarded as one of the most in-demand jazz pianists in the Northwest. A studied and musical ensemble player with a strong melodic vocabulary, John has always been recognizable for a unique personal voice.