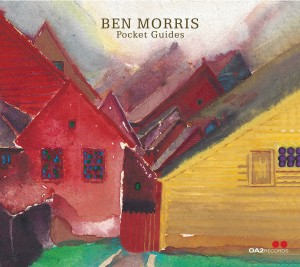 Writing for his large, uniquely-voiced ensemble, and with influences ranging from traditional Norwegian folk music, modern jazz, and contemporary classical music, composer/pianist Ben Morris's dynamic debut surprises and captivates. With his core group - Zosha Warpeha on Norwegian Hardanger fiddle and violin, Juan Olivares on clarinet, Dan Montgomery on bass, Evan Hyde on drums, and Ben on piano - he was invited to premiere four original pieces at the Newport Jazz Festival in 2019, setting in motion the inspiration to expand the ensemble and compositions to create Pocket Guides. With visions of bustling foreign cities, Norse mythology, tundras and waterways, Morris's music is cinematic, surprising and visceral, the rich textures reflecting his experiences living and studying in Norway, Korea, Florida, Texas, New Jersey, and now Colorado.

Midwest Record (Chris Spector)
Inspired by his world travels, this is an impressionistic guide to spots around the world. Except he's doing it with a big band that plays in a way of his own devices that he writes and arranges for with an out of the ordinary, singular vision. A cat whose work plays it straight while coloring outside the lines, he wants to bring you into the ten ...

All About Jazz (Jack Bowers)
4-STARS On Pocket Guides, his debut recording as foreman, Denver-based pianist Ben Morris leads a one-dozen strong quasi-big band with rather unusual instrumentation—two horns, two woodwinds, two violins, mandolin, cello, melodica and rhythm—through eight of his engaging compositions, most of which touch on his Norwegian heritage. To his credi ...