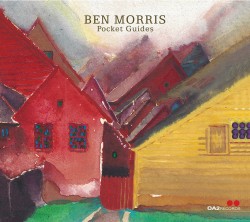 4-STARS On Pocket Guides, his debut recording as foreman, Denver-based pianist Ben Morris leads a one-dozen strong quasi-big band with rather unusual instrumentation—two horns, two woodwinds, two violins, mandolin, cello, melodica and rhythm—through eight of his engaging compositions, most of which touch on his Norwegian heritage. To his credit, Morris makes splendid use of every tool in his kit, writing with each of them in mind and making sure that everyone in the ensemble has an essential role to play. His themes are picturesque, at times esoteric, but always anchored in the jazz tradition, even when interposing Norse folk music or contemporary classical motifs. Most notably, they are fresh and original.

While clever solos by most hands are sprinkled throughout, for the most part they are subordinate to Morris's luminous charts, from which they spring as naturally as water from a fountain. Even though it takes a while for unalloyed jazz to hold sway, the shuffling blues "Old Barney," on which Morris on melodica, violinist Jack Bogard and drummer Evan Hyde earn high marks, makes the wait more than worthwhile. Five numbers precede that one including a vocal by John Boggs on "Bubbles in a River," whose lyric is as clear as ebony at midnight. The opener, "Ymir's Bones," based on Norse folklore, is a free-wheeling swinger with solos to match by clarinetist Juan Gabriel Olivares, trombonist Magnus Murphy Joelson, Morris on piano,, and superb backing by the ensemble.

Hyde is outstanding on the far east-flavored "Hongdae After Midnight," inspired by Morris' visit some years ago to South Korea, as are the soloists, muted trumpeter Derek Ganong, tenor saxophonist David Bernot and Bogard, this time on mandolin. Morris wrote the ballad "A Lost Pair of Kites" for his mother's funeral service in 2015, originally for cello and piano, then expanded the arrangement for the larger group. "Hvalsang" (Norwegian for "whale song") mimics a number of sounds made by various species of whale, simulated here by members of the ensemble, before morphing into a more conventional swing mode with sharp solos by Bernot, Ganong, Morris and Bogard.

The sunny "Fellfields," depicting an area of mountainous terrain close to a summit, leads to the martial finale, "Edvard," whose initial vibe seems more Scottish than Norse, even though inspired by Morris's Norwegian great-grandfather, Edvard Johansson, who as a twelve-year-old came by boat to Brooklyn from his native Bergen, Norway, a dark and ominous voyage whose perils give way to the energy and fervor of his new home in New York. Even though inspired by his Norwegian heritage, Morris' music seldom strays from its jazz bloodline, with swing and improvisation always given their due. On the other hand, this is jazz with an explicit Nordic flavor, which separates it from the more conventional themes heard on most recordings these days. Whether that serves as a plus or minus is for the listener to decide. The verdict here is an emphatic thumbs up.

Other Reviews of
"Pocket Guides":