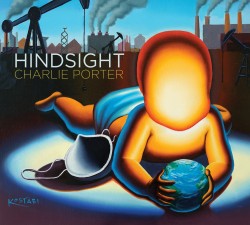 Possessing a refined compositional style and immersive sound, trumpeter/composer Charlie Porter reflects on the present times through a mix of mainstream and neo-bop that deftly combines familiarity and surprise. Hindsight, Porter's third album as a leader, finds him navigating great textures and ambiances with a core quartet - featuring pianist Orrin Evans, bassist David Wong and drummer Kenneth Salters - that, more often than not, is expanded with special guests.

The uplifting "Tipping Point" is a Wynton Marsalis-esque incursion delivered with manic swinging glee and asking for rapid lines and kinetic expression. Altoist and co-producer Nick Biello, acquiesces to that, launching the improvisations with unremitting energy. He's followed closely by Porter, who glides over the chords with unremitting energy, and Evans, who astounds with brilliant outside piano playing. Before the closing theme statement, Salters is given a chance to show that his drum chops are intact.

Both the title track and the waltzing "Requiem" are ballads. The former is enriched by Behn Gillece's vibraphone work and the cool airiness of Porter's muted trumpet, while the latter is a tribute to the victims of covid-19.

Guitarist Mike Moreno brings flexibility to the group on five pieces. On "Walking the Plank", where a friendly Latin announcement gives place to a pragmatic post-bop spirit, he engages in unisons with the bandleader. Both improvise with gusto on the hyped fusion "Things Fall Apart", which weds jazz, funk and hip-hop with the help of Pink Martini's affiliated vocalist Jimmie Herrod, violinist/lyricist Majid Khaliq and rapper Rasheed Jamal.

Draped with an inspired slick arrangement and Afro rhythmic underpinning, "In Short Supply" is definitely a highlight, featuring Malian musicians Bassekou Kouyate on ngoni and Mahamadou Tounkara on talking drum (tama). Evans' alluring keyboard plays an important role here and the musical affinities of the group are filled out with solos from soprano, trumpet and guitar.

Following "Paradise Lost", which alternates between a 4/4 swinging motion and confident waltzing steps, "For Ellis", written for Porter's newborn son, celebrates via chants of praise by the Hallowed Halls Gospel Choir, having the light-emitting trumpet complementing it.

The record addresses present concerns about the world but also hope in the future as seen by the lens of a formidable post-bop practitioner who knows how to recycle tradition for the sake of fresh contemporary music making.

Other Reviews of
"Hindsight":