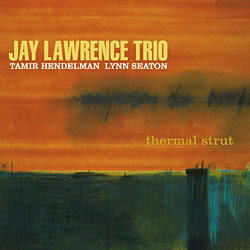 From the opening eight bars of the title tune, you know this will be an excellent release.

Although the individual musicians in this trio aren't well known to the listening public, they are key members of the musical fraternity. And, as is becoming the norm today, all are college graduates and teachers.

Jay Lawrence, the drummer and leader, has recorded more than 90 albums with the luminaries of music: You name the individuals or groups, and Lawrence has worked with them. He began his career at age 15, playing in Nevada showrooms, then moved into the fields of Broadway shows, movies, TV shows and concerts.

He's currently an assistant professor at the University of Utah, and a director of music at Brigham Young University, Snow College and Utah Valley State College.

Bassist Lynn Seaton began playing guitar at age 7, then switched to bass at 11. He studied music at the University of Oklahoma, and has played in 49 states of the union, not to mention more than 35 foreign countries. He currently teaches at the University of North Texas.

Pianist Tamir Hendelman began playing at age 6. He attended the Anazagi Conservatory in Tel Aviv, Israel, following that with Tanglewood Institute and the Eastman School of Music. He's an outstanding pianist and arranger; he did six of teh 10 tracks on this release.

This is a "happy" CD: wonderfully tasty, swinging, straight-ahead jazz. These guys really enjoy playing together, and they love what they're doing. The album is innovative but not far out; it makes you want to listen, and it's all danceable.

Lawrence supports beautifully, and never intrudes. Seaton is rock-solid, and is one of the few bassists I've heard who can play "bowed" solos and maintain the beat and melodic line. Hendelman is the icing on this trio's cake: He plays effortlessly and flawlessly, and swings like crazy. His treatment of "Love For Sale" is particularly impressive.

This is the best trio to have come along in years... don't miss it!

Other Reviews of
"Thermal Strut":

All About Jazz by Ken Dryden

All About Jazz by Dr. Judith Schlesinger