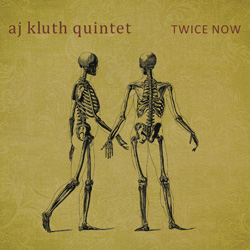 Chicago-native AJ Kluth was educated at that city's DePaul University before freelancing around the Midwest and transcribing and self-publishing a book of Chris Potter solos. On Twice Now he leads a guitar anchored quintet through nine lengthy and provocative pieces, seven of which were composed by Kluth or guitarist Nick Ascher.

The simpatico between Kluth and Ascher extends from the pair's compositions to their respective performances. Although under Kluth's name, Twice Now is effectively a collaborative effort by the saxophonist and guitarist.

The relationship between the two, as well as with pianist Sean McCluskey, is defined on the Ascher composition "Red" that opens the disc. Over McCluskey's spare piano chording, Kluth and Ascher double on a devilishly complex melody line. While Kluth is more Michael Brecker than Wayne Shorter (or Sonny Rollins), Ascher is more John Abercrombie than John Scofield. These comparisons are loose at best as both artists have very characteristic sounds. Kluth sports a full-throated muscular tenor and sinewy soprano, while Ascher is distorted at the edges, giving his guitar a slight rock tone.

Kluth and Ascher achieve a delicate dance of counterpoint throughout the disc, easily heard on "A Time, Times, And Half Time" and "Wi Fi," the latter containing a lyrical solo by McCluskey on acoustic piano. "Quiet, Then Go" is a breezy Kluth ballad accentuating the stronger points of Kluth and Ascher's slower soloing. Chick Corea's "Litha" fits perfectly with the originals as a smart and edgy piece not fully smooth at the edges, providing just enough bite for pleasure.