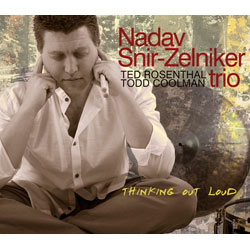 It is apparent over the last decade or so that Israeli-born jazz musicians are becoming increasingly a factor in the jazz pan¬orama. Consider the arrivals of guitarist Roni Ben-Hur, scat singer Ori Dagan, piano maven Tamir Hendleman, and, in the review that follows this one, tenor saxist Benny Sharoni. This time it's drummer Nadav Snir-Zelniker who has followed his passion for the jazz art from the Mediterranean to the Atlantic. Now a busy resident of The Apple, Snir-Zelniker would be required to display considerable jazz chops to connect with established New York vets like Ted Rosenthal, piano, and Todd Coolman, bass. He does just that on a recording that's loaded with invigorating piano trio material, both his stimulating originals and standards such as ?Se¬cret Love,? ?Isfahan? and a special rarity from Bill Evans simply entitled ?Interplay.? It also becomes clear that this is a showcase for former Gerry Mulligan pianist Rosenthal, as he cooks up a straightahead brew that steams with pleasure. For decades, the jazz art has welcomed esteemed players from such far away places as Sweden, New Zealand, Spain, Brazil and Russia, among others. Now it has extended to the state of Israel, to which we American jazz fans can only enthusiastically say shalom!

Other Reviews of
"Thinking Out Loud":