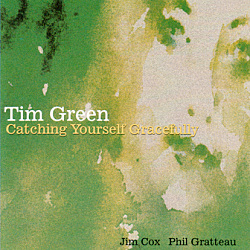 A nice excursion in piano jazz. The songs essentially alternate between new compositions by Green and old standards from various ends of the jazz realm. On the standards end he shows off Cole Porter's "Love for Sale," a Duke Ellington number, and "Back at the Chicken Shack," all with a reasonable amount of technical prowess, and a bit of soul in the latter. It's in his own compositions that Green handles himself with more feeling in general. "Green Eggs and Funk" gives him room to romp around the keys, kept in rhythm pretty well with a little bit of a catchy beat in the background provided by Phil Gratteau. "Coyote Samba" runs a similar course, but rather more subdued. "Wrong Again" gives Green a chance to emulate Bill Evans to the best of his ability. The album finishes up on the Jimmy Smith number quite well. For a nice look at a bit of contemporary piano jazz, this album does well. Make sure you've referenced the classics he's covering first, though.

Other Reviews of
"Catching Yourself Gracefully":