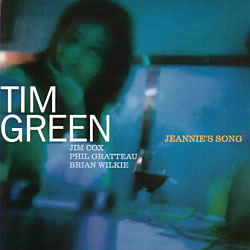 This is the sophomore album from Chicago pianist Tim Green, following quickly on the heels of the surprisingly successful Catching Yourself Gracefully. Here, he's joined again by his trio compatriots (bassist Jim Cox and drummer Phil Gratteau) as well as guitarist Brian Wilkie. Much of the same style is presented here as on the previous album, with carefully chosen works of modern jazz flowing somewhat effortlessly from the hands of the musicians. The pieces here show off a nice mixture of the old and the new, with a few old compositions from the likes of Cole Porter and Johnny Mandel, but also new items from John Scott, Brian Wilkie, and Green himself (interestingly, the one piece penned by Green, "The Hardest Part," is also the piece on which he sits out of the performance). Beyond the selection of songs, though, there's quite a bit of fine playing to be heard here, with the players perhaps not spending a large amount of time in far-flung solos, but providing some excellent interplay and creating a whole of relaxed afternoon jazz. The addition of the guitar aids the mood thoroughly as well. It would be hard to say that there are surprises here, but the album makes use of each of the players well, forming a solid swing throughout and a lot of nice chops on the side.

Other Reviews of
"Jeannie's Song":