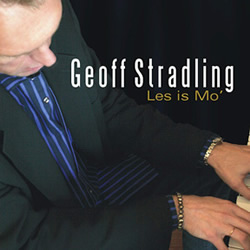 Long an inside secret in his adopted Los Angeles, composer and pianist Geoff Stradling's debut on Origin explores a collection of diverse jazz styles, all held together by a strong personal identity all his own. Nine original compositions run the gamut from jazz waltzes to scorching Latin funk. The lone standard in the collection "Stella By Starlight" is treated to an Afro-Cuban groove reminiscent of New York in the '70's and features the rhythm section of Ramon Banda, Rene Camacho & Michael Spiro. Rhythmic and harmonic ideas are abundant, but the real difference here is melody. A side effect of spending almost a decade living in Europe, the melodic component of Geoff's compositions and playing is fresh and potent, keeping a perfect balance between intellect and emotion.

Reviews of Les is Mo'

All Music Guide (Adam Greenberg)
On his Origin Records debut, Los Angeles pianist Geoff Stradling makes short work of showing why he was picked by the label. While the focus of Origin is generally on Northwest artists, they have some fair leniency if the music is good, and will pick up exceptional players that might not have been heard before otherwise. In the case of Stradling, y ...

www.tomhull.com (Tom Hull)
First album by a pianist whose CV starts off with increasingly long lists of film, tv, and commercial work (Pampers, Swatch, Purina -- just a few that strike my fancy), then trails off into a couple of dozen album appearances (Alphonse Mouzon, Jane's Addiction). Nothing there prepares you for this album, an easy swinging concoction with Rick Keller ...

L.A. Jazz Scene (Jim Santella)
Pianist Geoff Stradling arranged for each of the ten selections on his latest release to represent a different view of modern jazz. Besides the usual personnel changes during the session, he's instituted striking differences in the music so that we end up with impressions that honor Miles Davis, Eddie Harris, Dexter Gordon, Bill Evans, Aaron Coplan ...

Audiophile Audition (Jeff Krow)
Geoff Stradling is a man of many tastes. His Origin release gives his audience the chance to take a musical journey with him. The pristine sound that Stradling presents on the CD is an added bonus with Geoff himself both producing and engineering his maiden effort for the label. Recorded in February and August 2006, at Stradman Music (Stradling's o ...

Amazon (R.D. Wood)
Geoff Stradling is a highly accomplished composer, arranger, and musician living in Los Angeles. This is his debut work as a group leader and it is superb. Stradling is composer of unusual and original melodies and arrangements that are thoughtful, intelligent, and emotive. All compositions are by Stradling except "Stella by Starlight", presented h ...