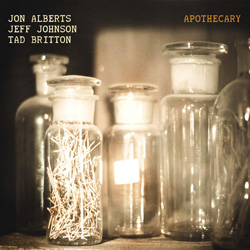 Located in a converted Chinese herbalist's shop above a former opium den in Seattle's historic Ballard neighborhood, pianist Jon Alberts' Fu Kun Wu Lounge blends this heady ambience with the eclecticism of modern jazz. Alberts, along with his luminary band mates, Jeff Johnson (bass) and Tad Britton (drums) have appeared weekly there for over a decade and, surrounded by the remaining elixirs and tinctures of the former herbalist's shop, they blend an aesthetic prescription with a subdued swing that is surely a cure for the ordinary. Apothecary conveys much of the hidden beauty of the Seattle jazz scene providing evidence that jazz is alive and well there. There isn't any other place quite like The Fu Kun Wu Lounge and no other musicians make the most of it like Alberts, Johnson and Britton.

All About Jazz (Dan McClenaghan)
An Internet search for the Fu Kun Wu Lounge in Seattle, Washington's Ballard neighborhood, reveals one patron's assessment of it as "one of the best kept secrets of the Seattle Jazz Scene." Many of the city's dynamic Origin Records stars perform in the converted Chinese herbalist's shop; players like pianists Bill Anschell and Marc Seales, saxophon ...

All Music Guide (Ken Dryden)
One of the greatest challenges that jazz musicians face is seeking fresh approaches to well-known songs. Fortunately, pianist Jon Alberts has performed with his bandmates for the past two decades and they make familiar music sound new. Bassist Jeff Johnson and drummer Tad Britton make the most of the subtle take of "On Green Dolphin Street," in whi ...

All About Jazz (Elliott Simon)
This Apothecary is filled with new medicine in old bottles as this very experienced trio presents thoughtful fresh takes on tunes they have more than likely played as a group for over 20 years. Monk's "Bemsha Swing" and "Mysterioso" retain their pianistic quirks but are opened up with an unhurried approach while "Nardis" is given a similar savoring ...

JazzTimes (Bill Milkowski)
This daring Seattle-based piano trio explores the remarkably intimate chemistry they've built up over the past 20-plus years. Together, they reinvent standards like "On Green Dolphin Street,""Nardis," "Footprints" and Turn Out the Stars" with rare sensitivity and telepathy, underscored by a slightly subversive streak. Tad Britton's delicate, colori ...