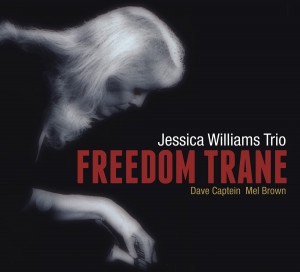 John Coltrane has been my light through the darkness. When there are questions, I'll ask 'what would Philly Joe Jones or Dexter Gordon do'; but when things get REALLY weird, I can ask the 'Trane.
-Jessica Williams

For her first trio outing in several years, Jessica Williams digs deep as she channels the spirit of John Coltrane with a set of originals along with compositions favored in performance by the saxophone legend. Joined by drummer Mel Brown and bassist Dave Captein, Williams is, as always, brilliant and transcendent. "I"m running out of superlatives to describe her playing!" - Humphrey Littleton, BBC.

OregonMusicNews.com ()
How can two hands playing piano sound like John Coltrane playing saxophone. Jessica Williams' do. The number of albums she has recorded over a stellar thirty-five year career is astounding. Her last album Touch is in Dan McClenaghan's Top Ten for 2010 on AllAboutJazz ? AND Scott Yanow's Top Ten for 2010 in JazzTimes. And who do we find her playi ...

All Music Guide (Alex Henderson)
John Coltrane tributes are not hard to find in the jazz world, and different tributes will celebrate different periods of the saxophone innovator's career. Some tributes pay homage to Coltrane's hard bop period (as in &"Giant Steps," &"Moment's Notice," and &"Lazy Bird"), others pay homage to his modal post-bop period of roughly 1960-1964, and some ...

All About Jazz.com (Dan McClenaghan)
Jessica Williams, one of our top jazz pianists, has evolved since she tossed the record company expectations and jazz games out the window into the thorny rose bushes, and sought out her own way, and found it, via the establishment of her own record label, Blue & Red Records, and with the work she has done for Seattle's Origin Records. Songs for a ...

Berman Music (Tom Ineck)
Ever since the death of John Coltrane more than 40 years ago, jazz musicians of every ilk have attempted to get at the core of his sound, the key to its immutable power and transcendent spirit. Aside from Coltrane bandmate McCoy Tyner, perhaps Jessica Williams on Freedom Trane comes as close to the source as a piano player is likely to get. F ...

Jazz Society of Oregon (George Fendel)
On her first trio recording in some years, Williams offers both original compositions in the spirit of John Coltrane and a selection of Trane's work as well. As she writes in liner notes: "John Coltrane has been my light through the darkness. When there are questions, I'll ask 'what would Philly Joe Jones or Dexter Gordon do'; but when things get r ...

Rifftides (Doug Ramsey)
The pianist has concentrated on solo performance lately but returns to the trio format by way of this paean to John Coltrane. Accompanied by bassist Dave Captein and drummer Mel Brown, Williams explores four pieces by Coltrane and four of her own that pay tribute to the man she has long acknowledged as a major musical and spiritual inspiration. In ...

Cadence (Jerome Wilson)
Pianist Jessica Williams explores the music of John Coltrane, playing compositions from various parts of his career as well as original pieces that strongly show his influence. All the familiar Coltrane characeristics are here: heavy chords, grand swirling introductions, and slowly unwinding melodies. But there are not a lot of direct takes from ...

Jazziz (John Frederick Moore)
Is Jessica Williams capable of a false step? The pianist continues to put out one stellar recording after another, though without the fanfare that accompanies some of her peers. Her latest, a tribute to John Coltrane, is as soulful as anything she's recorded and just as elegant. The eight tracks are evenly split between Williams originals an ...

Audiophile Audition (Jeff Krow)
A spiritual tribute to Trane? **** Stars Jessica Williams has been steadily recording as a West Coast based jazz pianist since the mid-70s, but perhaps because she does not have East Coast publicity, has never received the acclaim she is due. She has a Monk-influenced intensity, and is equally at home interpreting both her own compositions, and ...

Jessica Williams
The Art of the Piano
Origin 82542