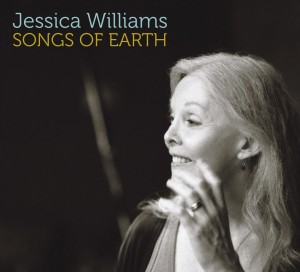 ...the Williams touch arises from every aspect of her musicality and goes beyond technique into the rarified territory of recognizability.
Doug Ramsey, Rifftides

Refusing to declare itself of any genre, Jessica Williams' new collection of solo piano works was mostly composed on the spot over several performances at Seattle's Triple Door. The collection formed itself through Williams' countless listenings of the raw recordings with the separate pieces becoming a single story in her mind. It's a novel written in public and the theme, while oceanic in scope, is musically subtle as the intention of it did not exist during its performance. Containing very few pre-rehearsed lines - a stellar rendition of John Coltrane's "To Be" and sketches of two original works - it exists only for the symphonic nature of the solo piano.

Reviews of Songs of Earth

Audiophile Audition (John Henry)
I think this is the finest solo piano CD I?ve enjoyed in years! ***** 5-stars Jessica Williams is one of the top jazz pianists playing today, and if you?re a jazz piano fan and not familiar with her work, remedy that right away. She had classical training and was the house pianist at San Francisco?s Keystone Korner for many years. Jessica has be ...

All Music (Ken Dryden)
Jessica Williams has built a following with her introspective style of solo piano. Songs of Earth compiles performances from several years of her appearances at The Triple Door in Seattle, most of which were improvised on the spot. "Deayrhu" (a title she admits that she can't explain) is a fluid, shimmering work with several dramatic shifts. The bi ...

Urban Flux (Rob Young)
It wasn?t until recently had the honor to listen to pianist Jessica Williams play for the first time. With that said, her latest recording ?SONG OF EARTH? is simply stunning accomplishment for her. In fact, I have a tendency of shying away from solo recordings but I?m reminded with this lovely offering by Williams of the importance of artists recor ...

A Jazz Listener\'s Thoughts Blog (David S.)
A pianist you need to hear - Jessica Williams I was amazed that Jessica Williams is still a player whose music is very much under the radar. With her long list of accomplished CDs, both on her own labels and now for the sixth time on Origin with the latest, "Songs of Earth" (Origin 2012) I can only surmise that her location in the Northwest, ...

Rifftides (Doug Ramsey)
Williams, the Triple Door?s Steinway and the Seattle theater restaurant?s audience collaborate on yet another album of solo pieces by the pianist. The audience gets credit because their attentiveness, appreciation and courtesy help establish the atmosphere in which Williams creates seven pieces comprising a collection unlike any other in her vast d ...

Jazz Society of Oregon (George Fendel)
Over a period encompassing several engagements at Seattle's The Triple Door, pianist Williams compiled six original compositions (of the seven played here) which seemed to have a common thread. All were completely improvised on the spot, and in her effort to meld them into an artistic whole, she chose pieces which complement one another. While the ...

All About Jazz.com (Dan McClenaghan)
Jessica Williams, with her last four CDs on Origin Records, is like a butterfly coming out of its cocoon. Earlier in her career, Williams?who once held the piano chair in drummer Philly Joe Jones band?wrapped her artistry in the Great American Song on Some Ballads Some Blues (Red and Blue, 1999), along with stellar tributes to departed star pianist ...

New York City Jazz Record (Donald Elfman)
The four artists (Jessica Williams, Denny Zeitlin, Arturo O?Farrill, Gabriel Zufferey) who make up this quartet of splendid new solo piano recordings are careful and thoughtful in their choice of both notes and spaces. The performances collected here are clearly about expression. In concert at Seattle?s The Triple Door, on Songs of Earth Jessica ...

Jazz Police (Andrea Canter)
One of the most unheralded poet laureates of jazz piano, Jessica Williams has quietly forged a career on the West Coast, yielding an impressive body of solo and trio work with limited touring and headlines. Her latest project for Origin is drawn from solo performances in 2009-2011 at Seattle?s Triple Door. Songs of Earth includes six original compo ...

Bird Is The Worm Jazz Blog (Dave Sumner)
Solo piano albums just leave me entranced. They have the ability to sound as expansive as the sea and just as deep, while also revealing an intimate fragility that can be as endearing as the former quality is awe-inspiring. Culling recordings from solo performances recorded over a three year stretch at Seattle?s Triple Door, pianist Jessica Wil ...

JazzTimes (Britt Robson)
If there were a lifetime achievement award for Talent Deserving of Wider Recognition, this veteran West Coast pianist would have it in her criminally modest trophy case. Her sixth disc for the Origin label supposedly differs from the others for its heavy emphasis on spontaneous composition, with the material culled from live solo performances over ...

Downbeat, December 2012 (Bob Doerschuk)
It takes guts to walk out onstage with nothing but a piano, your imagination and trust that you can bring the two together in fruitful combination. On Songs Of Earth, Jessica Williams takes up this challenge, which was recorded live over several nights at the Triple Door in Seattle. The album overall cases a mood of somewhat sad reflection. Mino ...

Cadence (Larry Hollis)
Songs of Earth dispenses with the upright bass and trap drum kit for a solo piano recital from Pacific Northwest player Jessica Williams. She had built up a healthy discography before she started devoting herself to solo settings in the eighties and these mostly improvised meditations were taken from tapings over a two year period (2009-2011) at Se ...

Jazziz (John Frederick Moore)
There's long been a spiritual component to Jessica Williams' work, but rarely has it been as explicit as it is on this set of solo piano pieces. Taken from live performances in Seattle over a three-year period,the seven selections are largely spontaneous improvisations, and that raw creativity is what makes this disc so satisfying, both musically ...

JazzScan (Ric Bang)
Pianist/composer Jessica Williams is an elite musicians who is so well known that she needs little introductory or background verbiage to inflate reviews of her albums. Like many pianists, she began her studies with the classics and switched to jazz during her teens. Unlike most beginners, however ? who start out playing with unknowns ? Williams wa ...

Jessica Williams
The Art of the Piano
Origin 82542