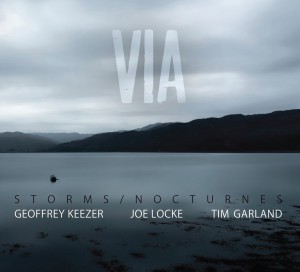 With VIA, the third album by the chamber jazz trio Storms/Nocturnes, British saxophone legend Tim Garland, world leading vibraphone virtuoso Joe Locke and recent Grammy nominee, pianist Geoffrey Keezer, create a unique three-way dialogue of captivating, immersive music. Bringing their different styles and backgrounds together, they create music which can be spacious or immensely complex, delicate but often approaching orchestral depth, and collectively find their way into a new mood or feel before the listener knows they have left the old one. Their spontaneous interaction, the dovetailing, the assertion of contrasting yet mutually supportive roles are all taken to a new level on this recording. This enduring international alliance of Jazz giants is celebrating its tenth anniversary with this album and concerts throughout Europe and the U.S.

All Music Guide (Ken Dryden)
Storms/Nocturnes consists of pianist Geoff Keezer, vibraphonist Joe Locke, and multi-reed player Tim Garland. While they have worked together in the past, this is the first time they have recorded under this new name. The beauty of this release is due in part to the Impressionist nature of each musician's originals, as it is easy to conceive images ...

London Jazz (Frank Griffith)
The Storms/Nocturnes trio, which was celebrating the release of its new CD, VIA on Origin Records, is composed of the "3000 Mile Club" (the distances between their respective domiciles) of jazz pianist, Geoffrey Keezer (San Diego), vibist, Joe Locke (New York City) and multi-reedist, Tim Garland (Whitley Bay), who make up a completely equal triumvi ...

Jazzwise Magazine (Robert Shore)
It's been eight long years since this transatlantic chamber trio last released an album, and how the players have developed and grown in the interim. It's perhaps a reflection of that greater degree of maturity that this is a much more egalitarian outing, with the players contributing equally to the writing (in fact, Keezer gets four tunes to Locke ...

All About Jazz.com (John Kelman)
Virtuosity can, when it's the raison d'Ítre, be an impediment; when it's a foundation, in service of the music, it can be liberating. Storms/Nocturnes was initially the brainchild of Tim Garland but, after first convening as a subset of the sextet on the closing track to the British saxophonist/composer's Made By Walking (Stretch, 2000), ultimately ...

Mojo Magazine (Chris Ingham)
After a seven-year hiatus, the third album by superstar chamber trio doesn't disappoint The music made by British saxophonist Tim Garland, pianist Geoffrey Keezer and vibraphonist Joe Locke is of such high-end refinement, beuaty and excitement that their Storms/Nocturnes trio is in danger of being leader in a field of one. Using a detailed, near ...

NDR Radio, Germany "Album of the Week" (Mauretta Heinzelmann)
"Via", the new album by the trio "Storms / Nocturnes" is at all musical qualities, the most striking feature of the addiction factor: it looks forward to hearing it again and again, a positive atmosphere full of life rings through in almost every way. by casual virtuosity as well as by sensitive melodies are influenced piano, vibraphone and saxopho ...

Ultimo L¸beck (Germany) (Joachym Ettel)
"The fact that vibraphonist Joe Locke and pianist Geoffrey Keezer make a highly captivating team has already been established at JazzBaltica 2007 where they created extraordinary moments, often even outshining the sum of all components. Locke and Keezer have always been sharing a similar musical philosophy and know how to drive each other on to cre ...

Jazz Society of Oregon (Kyle O'Brien)
This is the third disc by the chamber jazz trio Storms/Nocturnes, and it cements the group as one of the tops in its genre. Pianist Geoffrey Keezer, vibraphonist Joe Locke and saxophonist Tim Garland put out textural compositions that combine the musical signatures of all three in a cohesive vision, while allowing each voice to stand on its own. Th ...

JazzTimes (David Whiteis)
Storms/Nocturnes--reedman Tim Garland, pianist Geoffrey Keezer and vibraphonist Joe Locke--originally evolved out of the septet Garland led on his 'Made My Walking' project in 2000. This percussion-less trio format illuminates the interweaving voice's subtleties, strengths and dexterity. However, it also challenges them to be fully realized at al ...

Cadence (Jerome Wilson)
Via features a more experienced British musician, saxophonist Tim Garland, working together as a trio with American pianist Keezer and vibes layer Locke, as they did a decade earlier. I've seen this group compared to the team of Gary Burton and Chick Corea, but of course there was no saxophone in that group. Garland adds an extra drive to the fo ...