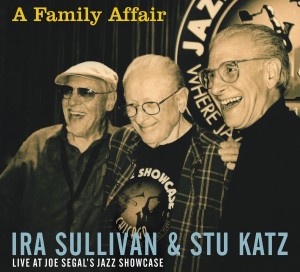 It was standing room only at the Jazz Showcase, and for good reason...When this week is done, multi-instrumentalist Ira Sullivan and pianist-vibist Stu Katz will have documented one of the more enduring partnerships in jazz.
-Howard Reich, Chicago Tribune

With a 57-year history of performing together, going back to their 1954 meeting in their hometown of Chicago, the legendary saxophonist/trumpeter Ira Sullivan and vibraphonist/pianist Stu Katz team together finally to commit their well-earned rapport to tape. Recorded live at their good friend Joe Segal's famed Jazz Showcase, with a quintet including pianist Dan Trudell, bassist Dennis Carroll, drummer George Fludas, plus a couple of special guests, "A Family Affair" swings with the joy and magic that only such a shared history can create.

Jazzespress (Lloyd Sachs)
Yes, sometimes a cigar is just a cigar, but sometimes an album is more than an album. Just looking at the cover of Ira Sullivan's new CD, A Family Affair, looking at him sharing grins with Joe Segal of the Jazz Showcase (where the CD was recorded) and vibraphonist/pianist Stu Katz (his co-leader and longtime crony), summons deep feelings of good fo ...

Jazz Society of Oregon (George Fendel)
At the Otter Crest Jazz Weekend, I once had the amazing experience of witnessing Sullivan alternate between brassy things and reedy things. The only other guy I can think of who plays trumpet and saxophones really well is Seattle's Jay Thomas. Many remember Sullivan from a lengthy partnership with trumpeter Red Rodney. But live at Joe Segal's Jazz ...

All Music Guide (Ken Dryden)
Multi-instrumentalist Ira Sullivan spent a good while working around Chicago before leaving for Florida in the early '60s, though he retained a significant fan base in his old hometown. This live recording made in 2010 over four nights at Joe Segal's Jazz Showcase is a reunion, featuring vibraphonist Stu Katz, who while in his teens had regularly s ...

All About Jazz (William Carey)
Some numbers to ponder. Saxophonist/trumpeter Ira Sullivan is 80 years old; vibraphonist Stu Katz is 74. 57 years. That is how long Ira Sullivan and Stu Katz have been making music together. 64 years. The number of years that Joe Segal's the Jazz Showcase has been featuring great jazz. In 1954, the year Bill Haley and the Comets recorded "Rock Arou ...

Jazziz (DP)
Is there a greater living standard-bearer of classic Chicago jazz than Ira Sullivan? Certainly few, if any, musicians possess a tastier, earthier sense of swing. On this nine-track set, the 80-year-old saxophonist/trumpeter teams with vibraphonist/pianist Stu Katz, a fellow old-school jazzer who first played with Sullivan 57 years ago but who nev ...

Cadence (David Franklin)
Ira Sullivan was 79 years old when this live session was recorded and Stu Katz was in his early seventies. You'd never know it. They both play with the verve and skill of much younger men. And although Sullivan has had a long career as a musician, Katz has spent his professional life as an attorney. But, again, you would not be able to tell it fro ...

JazzTimes (Lloyd Sachs)
Ira Sullivan hasn't lived in Chicago since 1963, when he moved back to Florida to bask in the warmer climes, teach and perform with/mentor young players in the Miami area. But he is still regarded as a hometown hero in the Windy City, where he emerged as one of bebop's strongest voices alongside such peers as Johnny Griffin and Wilbur Campbell. W ...

Chicago Jazz Magazine (Dan Healy)
Sonny Rollins once called himself a ?survivor of jazz?s illustrious period.? Such is the case with Ira Sullivan and Stu Katz, who are both forged in the style of bebop?s halcyon days. Unlike young lions, who transcribe the records of Charlie Parker and Miles Davis, Sullivan and Katz rubbed elbows with Jackie McLean, Milt Jackson, Art Blakey, Sonny ...