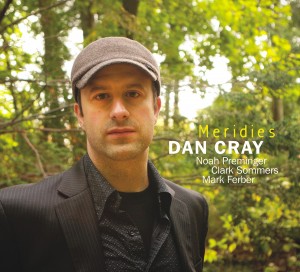 emusic Review (Jayson Greene)
Nice straight-ahead set of tunes featuring former Chicagoan Dan Cray on piano leading a quartet that includes new sax wunderkind Noah Preminger. Nothing groundbreaking, just decent jazz. Album ender ?March of the Archetypes? not only sends the album off on a terrifically addictive note, but has me intrigued to see where Cray goes with his next reco ...

All About Jazz (Dan Bilawsky)
Change is never easy, but it's often the key to growing as a person and an artist. Pianist Dan Cray has released a series of well-received CDs and carved out a comfortable musical existence with his trio in Chicago, but he understood that a change of scenery and a jump into jazz's deep end would do him good. Cray made the move to New York City ...

Blogcritics.org (Joe Ross)
The eight tracks on pianist Dan Cray?s Meridies project each run from five to seven minutes long, and that simple fact is the first indication that the full quartet (which includes tenor saxophonist Noah Preminger, drummer Mark Ferber, and bassist Clark Sommers) doesn?t believe in rushing things. Everyone gets a chance to shine in the arrangements ...

Jazz Truth (George Colligan)
Every time I turn around, there is a another great jazz pianist. (I think we need to put a cap on the number of great pianists. Just kidding.....) Dan Cray is the latest to cross my path. His new CD, "Meridies", showcases his sparkling technique and intriguing musicianship. It's a disc that has some trio and some quartet. It's a very warm and b ...

All About Jazz (C. Michael Bailey)
There is nothing iconoclastic about pianist Dan Cray. He derives his piano style more from Tommy Flanagan and Hank Jones than Matthew Shipp or Ran Blake. He has been driving a trio through four previous recordings: Who Cares (Cray Sounds, 2001); No One (Blujazz productions, 2003); Save Us! (Blujazz productions, 2005); and Over Here Over Heard (Craw ...

Chicago Jazz Magazine (Dan Healy)
Judging especially from the liner notes, life change and forward motion are a major theme of Dan Cray?s new quartet CD, Meridies. As a virtuosic pianist who has recently made the journey from Chicago to New York, the sidemen selection seems only natural. Cray and bassist Clark Sommers have both worked in Chicago and New York, while saxophonist Noah ...

Jazz Scan (Ric Bang)
Origin Records always finds promising new jazz musicians; pianist Dan Cray, one of the youngest to come along in awhile, is the most recent example. He?s in his mid 30s, graduated from Chicago?s Northwestern University in 1999, and currently is working on a master?s degree at New York University, where he?s also a member of the faculty. He was a fi ...

The Jazz Page (Darryl Daniels)
On his latest, Meridies, pianist Dan Cray provides a fantastic portrait of contemporary quartet of musicians at work. Cray is joined by a terrific group comprised of Noah Preminger on saxophone, Clark Sommers on bass and Mark Ferber on drums, all whom provide solid musicianship in their respective chairs. The four musicians swing quite nicely on th ...

Chicago Reader (Peter Margasak)
Terrific pianist Dan Cray, a native of Glen Ellyn, moved to New York in 2009 after spending much of the previous decade building the reputation of his fine Chicago trio with bassist Clark Sommers (now teaching in Idaho) and drummer Greg Wyser-Pratte. On Meridies (Origin), his recent fifth album and first since leaving town, Cray tweaks the group, a ...

Downbeat, October 2012 (Bob Doerschuk)
**** Listening to Dan Cray and his group, one is reminded that underplaying can cast more light than a sky full of fireworks. That's not to say that there aren't busy moments on Meridies; there are plenty, especially in ostinati that the piano and bass play in unison to build momentum and sometimes to thread intricate rhythms together. But these ...