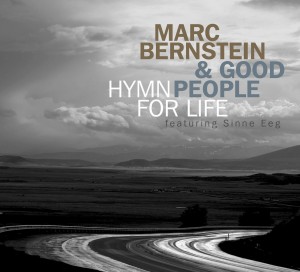 Bernstein's compositions have an inquisitive nature that gets the musicians in a searching frame of mind. Cool, evocative music!
- emusic.com

New York-bred and Denmark-based saxophonist, Marc Bernstein, has built a rich recording catalog over the last 20 years, centering projects around inspiring musical voices and friends including Tom Harrell, Billy Hart, and David Kikoski. For the eight originals, along with a version of "Windmills of Your Mind," making up Hymn for Life, Bernstein focused on the "Good People" around him and in particular, the mesmerizing vocalist Sinne Eeg, his former student, now colleague at the The Southern Danish Conservatory and Denmark's most prominent jazz vocalist. Longtime friend and musical collaborator, Bob Moses, contributes his deeply unique rhythmic and orchestral concepts to the band, which also includes pianist Jacob Anderskov and bassist Jonas Westergaard. "...the music is driven by an intensity which is impossible not to be attracted to." - Politiken.

Reviews of Hymn For Life

Midwest Record (Chris Spector)
There's quite a bit of subtle mix mastering here as the New York sax man relocates to Denmark, brings old pal, Bob Moses, in for the session, has a former student of his drafted into being the crew's vocalist and finally rounding out the gang with some well skilled locals we aren't familiar with. Bernstein has developed his sense of Euro jazz bu ...

emusic Review (Dave Sumner)
Bernstein is intoxicatingly lyrical on woodwinds, and that he often switches between the sweet disposition of soprano sax and the soulful irreverence of bass clarinet often within the span of an album just makes the synthesis of sounds even more delectable. On this current release, he adds Jacob Anderkov on piano, Jonas Westergaard on bass, Rakalam ...

Gaffa - Denmark (Ivan Rod)
Marc Bernstein, Sinne Eeg and Co. have with sensuous textures, created a monstrously beautiful vocal jazz album. The resident American jazz saxophonist and bass-clarinetist, Marc Bernstein, has repeatedly shined on his previous albums, and he does it yet again on his new album, Hymn For Life, which is alluringly beautiful and melodic. A feature ...

LongPlay: RadioJAZZ - Poland (Robert Ratajczak)
[translated from Polish] The name Marc Bernstein, apart from concerts in 2012 and 2013 (ie 10.05.2013 at the Blue Note in Poznan) can be associated with such outstanding artists as Branford Marsalis, Michael Brecker, Billy Cobham and the famous Danish Klüvers Big Band (known even with the excellent album recorded with Mulgrew Miller, Grew's Tune, ...