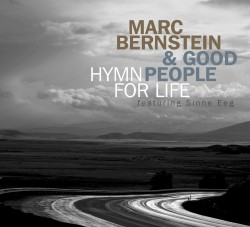 [translated from Polish] The name Marc Bernstein, apart from concerts in 2012 and 2013 (ie 10.05.2013 at the Blue Note in Poznan) can be associated with such outstanding artists as Branford Marsalis, Michael Brecker, Billy Cobham and the famous Danish Klüvers Big Band (known even with the excellent album recorded with Mulgrew Miller, Grew's Tune, 2012). The list of famous musicians with which Bernstein has worked over the years is in fact very long. His first instrument (clarinet) he received from his grandfather, a Jewish immigrant who was born in Radomiu. It is not surprising that he often echoes of Jewish music and klezmer being raised in Brooklyn. Today, Marc Bernstein, a graduate of the prestigious Berklee College of Music, is a musician of extraordinary reputation in the jazz environment. He is also the director of the prestigious university Syddansk Musik Konservatoium in Denmark. His album Meet The Kibricks, recorded in 2006 in Copenhagen and published in 2007, is dedicated to his ancestors. However his new album Hymn For Life, released by the prestigious American label Origin in March 2013, is kind of an ode to his friends. Bernstein invited to participate in the recording acclaimed Danish vocalist Sinne Eeg (familiar from his previous projects including Meet The Kibricks, 2007), pianist Jacob Anderskova, and a great rhythm section: Jonas Westergaard (bass) and Rakalam Bob Moses (drums), known for performing with Gary Burton, Pat Metheny and Steve Swallow.

Generally I cannot rave about contemporary female jazz vocalists. In the case of this album, however, I must make an exception. This is largely thanks to Marc Bernstein's former pupil Sinne Eeg, now one of the best Scandinavian singers. Her performance on Hymn For Life is characterized by a high potential and exceptional power. The ablum is adorned with her ​​vocals and sung texts which were written by her specifically for this project. Her performance on Hymn For Life is difficult to classify as jazz. Her voice appears in the recordings often only after two or three minutes ("Neil's Birds"), and the lyrics are often limited to a few lines ("Wand'ring," "Ms. Oaks I Presume"). It's just one of the instruments--subtle, delicate, but also capable of extraordinary energy and radiant heat.

Pianist Jacob Anderskova adds a kind of chill to Bernstein's music which is so characteristic of Scandinavian jazz artists and can be traced back to the sound of ECM. The opening of the album is set in two scenes spanning the fist two tracks, "Ms. Oaks and Presume" and "Wand'ring." The beautiful stylish ballad is "Hymn To Life", with sleepy bass impressions (exquisitely created in the middle of a lengthy solo), classic piano parts, brush drums and a saxophone almost whispering intimately.

I do not know whether I prefer Marc Bernstein on the saxophone or a on the bass clarinet. Some of the songs on Hymn For Life are an opportunity to hear both soprano and alto saxophone and bass clarinet and in each of these conventions Bernstein's game impresses with extraordinary emotion and message. The standard by Michel Legrand "The Windmills Of Your Mind" is a peculiar interlude being the only composition not written by Marc Bernstein; it was recorded as an acoustic duo with the leader playing the bass clarinet accompanied by Sinne Eeg. This seems to divide the album into two "acts."

This contractual "Act II" starts with the the instrumental "Kirk & Pepper" where Bernstein's poignant theme, illuminated by brass and percussion, gives way to a moment of piano with the impressive Jonas Westergaard backing it up on bass. With touches of ethnic Far Eastern melodies, improvised piano and expressive saxophone melodies, this act takes on a slightly different dimension. A bass clarinet solo opens the eight-minute "Neil's Birds" and is soon accompanied by bass and the sound of birds singing in the distance. Eventually Anderskov, Moses, and finally Sinne Eeg join in and give a sense of Flora Purim herself in her best years.

The swinging vocal and instrumental "An Angel On The Corner" precedes a reprise of the earlier "Ms. Oaks I Presume." The unusual album drama makes every minute of listening intriguing and definitely addictive, not allowing you to get away from the sounds heard by the entire hour-long duration of this musical story. Well, Hymn For Life is one of the biggest musical surprises of 2013.

Other Reviews of
"Hymn For Life":