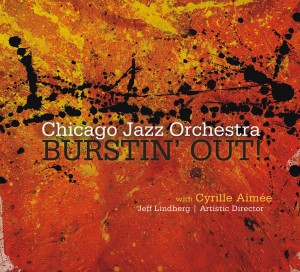 Now entering its 35th year, the Chicago Jazz Orchestra has built a resume that ranks it among the greatest artistic institutions in the city, if not the United States. For their latest recording, director Jeff Lindberg teams the CJO with the quickly emerging vocalist Cyrille Aimee for a diverse album of great jazz classics. Beside the timeless arrangements of Claus Ogerman, Billy May, Paul Weston, Count Basie and Duke Ellington, new arrangements are offered by Diego Figueiredo, Assaf Gleizner, Taylor Eigsti, Cyrille Aimee, and members of the Orchestra. From the standard big band setting to a full studio orchestra with strings, "Burstin' Out!" offers a sweeping, swinging recording that promises to become a classic.

Reviews of Burstin' Out!

Jazz History Online (Thomas Cunniffe)
Jazz History Online is not in the business of fortune-telling, but it's always gratifying to hear young musicians who have mastered the jazz language and have the potential to either carry the old traditions into the future or blaze innovative trails. The three vocalists reviewed here are all currently in their late 20s or early 30s and have devel ...

emusic (Dave Sumner)
A wonderful old-school big band album that brings a big sound and an intimate warmth. Led by Cyrille Aimée's inviting vocals, the orchestra hits some classic standards with an embraceable verve. "Yardbird Suite" has trumpeter Marquis Hill taking a nice solo, though its the orchestra's take on "Long As You're Living" that provides the album ...

Midwest Record (Chris Spector)
Jeff Lindberg and his venerable crew start flirting with middle age as they enter their 35th year with spring in their joints and bounce in their steps. Keeping the memory of the great arrangers alive while featuring some up and comers and showcasing a new jazz vocalist that knows the swing is the thing, this is a full on orchestra, kicking it out ...

WUMR - Memphis (Malvin Massey )
The Feature CD of the Week is a big band disc that is full of energy. It's titled Burstin' Out! and is from the Chicago Jazz Orchestra with Cyrille Aimée. Jeff Lindberg is the Artistic Director for this project. The Chicago Jazz Orchestra traces its roots back to 1978, and in that 35 years, they have established themselves as one of the best mu ...

Oregon Jazz Scene (George Fendel)
This CD could have easily been released under the name of the singer on the session, Cyrille Aimée. She sings on all 12 tracks and that, in essence, makes it her album as much as the Chicago Jazz Orchestra's. The CJO has been making music since 1978, and I'd suggest that if they were out of New York, we'd all be well acquainted with them. The a ...

All About Jazz (Matt Marshall)
Covering the Great American Songbook can be tricky, thankless work for a singer. The options for handling the material just aren't as numerous (i.e., nigh infinite) as they are for instrumentalists. Severely warping a melody, chopping it up or getting rid of it altogether work perfectly well if you're blowing through a horn. But such abstractions ...

Amazon.com (Thomas W. Altizer)
This album swings! The vocalist, Cyrille Aimée, is a perfect addition to one of the tightest big band ensembles in memory. From the first cut, "What A Little Moonlight Can Do" to the extraordinary "It Don't Mean A Thing..." both the band and the singer are in perfect harmony and simply raise the roof! To see this pairing live would no doubt b ...

The New York City Jazz Record (Jeff Stockton)
Cyrille Aimée didn't come from nowhere. Having won two jazz vocal competitions in 2007 and 2012 (with a 2010 bronze in between) she was primed for success. She sounds equally comfortable singing in the jazz style she grew up hearing in France, assaying the Great American Songbook, or pop music, as the occasion demands. Her voice is deceptively po ...