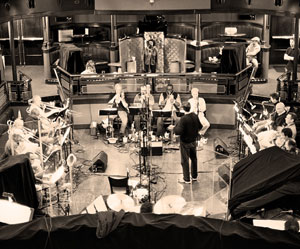 The best big band in the country.
- Clark Terry

Now entering its 35th year, the Chicago Jazz Orchestra has built a resume that ranks it among the greatest artistic institutions in the city, if not the United States. For their latest recording, director Jeff Lindberg teams the CJO with the quickly emerging vocalist Cyrille Aim�e for a diverse album of great jazz classics. Beside the timeless arrangements of Claus Ogerman, Billy May, Paul Weston, Count Basie and Duke Ellington, new arrangements are offered by Diego Figueiredo, Assaf Gleizner, Taylor Eigsti, Cyrille Aim�e, and members of the Orchestra. From the standard big band setting to a full studio orchestra with strings, "Burstin' Out!" offers a sweeping, swinging recording that promises to become a classic.