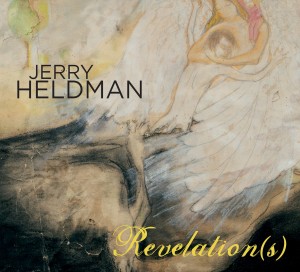 This wizard never slept, and played extraordinary jazz bass and piano, from dusk till dawn. Every night, his friends came to play with him.
- PAUL DE BARROS, SEATTLE TIMES

An exceptionally talented and eccentric figure in the Seattle jazz scene, bassist and club owner Jerry Heldman passed away in 2013, but left an indelible mark on a generation of artists who found their way to his fabled Llahngaelhyn Coffee House in the '60s. Larry Coryell, David Friesen, and Ralph Towner were a few who would jam until the wee hours with visiting artists such as Chick Corea, Roland Kirk, & McCoy Tyner, creating a legendary and influential jazz workshop. For Revelation(s), bassist David Friesen compiled tapes from live recordings of Morning Star, his quartet with Heldman in the early '70s, as a tribute to a singular musician and friend.

Midwest Record (Chris Spector)
If you want to feel like a real Seattle jazz scene insider hipster, this twofer is the right place to start. Recorded 40 years ago after an already budding 10 year simpatico with David Friesen, this cat who wore many hats before passing last year created a cross roads in Seattle for jazz to flourish. With Friesen on board as producer and bass/pia ...

Seattle Times (Paul de Barros)
This double CD fills in a long lost missing link in Northwest jazz history. Recorded live in 1973 and 1974 at various small venues in Portland and Seattle, the music is played by a quartet led by the late, legendary - but seldom-recorded - Seattle pianist (and bassist) Jerry Heldman, who from 1965-68 presided over the Llanghaelhyn, a coffee house o ...

Ancient Victorys (Chris Lunn)
These historic Northwest jazz recordings are from Seattle and Portland from 1973 and 74 with a stellar band called Morning Star. Friesen and Heldman met in the early sixties in Seattle. Both were bass players and influenced by the work of Scott Lafaro. They played and wrote music as well as being close friends. So they would not be limited to two b ...

Jazz Weekly (George W. Harris)
Jerry Heldman plays bass, piano, flute and even throws in some vocals as he leads a rhythmic team of David F risen/b-p, Sam Lipumag and Allan Pimentel/dr through a collection of sessions from the 70s. Because of the age of the sessions, the sound can be a bit thick at times, but the energy is fervent and heart felt. Lyrical pieces such as “Bossa ...