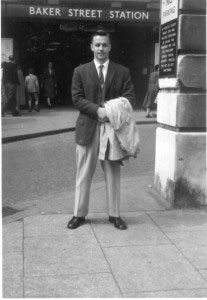 This wizard never slept, and played extraordinary jazz bass and piano, from dusk till dawn. Every night, his friends came to play with him.
-Paul de Barros, Seattle Times

Once upon a time, in the Emerald City, in a castle with a fairy-tale turret south of the University Bridge, there lived a wizard.

This wizard never slept, and played extraordinary jazz bass and piano, from dusk till dawn. Every night, his friends - many of whom would later become famous musicians - came to play with him.

This wizard was a strange, but gentle fellow. Some nights, he wore a helmet made of tinfoil, "to ward off evil vibrations." But everyone who came to the wizard's castle said it was a wonderful, magical place.

As old-timers on the Seattle jazz scene know, the wizard is Jerry Heldman and his castle was the fabled, underground club the Llahngaelhyn. Now a Romio's Pizza, the Llahngaelhyn was a coffeehouse that for three storied years (1965-68) nurtured an underground, bohemian scene that featured traditional and experimental jazz, rock and folk music in a mix that still survives today. The late beat poet Jesse Bernstein also used to hold court there.

On Sunday and Monday, from 5 p.m. till midnight (both days), Heldman is throwing a Llahngaelhyn reunion at On the Boards on Lower Queen Anne. The event is free, including food.

"Heather Hammond kind of shanghaied me into doing this," explained Heldman, who has lived in Yacolt, Clark County, since the early '70s, where he plays music only as a hobby. "As soon as I started talking to people I was so enthused, I said, `You're right, we gotta do it.' "

Heldman, 63, was born in Fargo, N.D., but grew up in Seattle, attending West Seattle High School. A natural, he taught himself to play bass, piano and drums. After a stint in the Air Force (1955-59), he started working at another vintage Seattle club, Pete's Poop Deck, with drummer Vernon Brown. During the World's Fair, he played rock 'n' roll drums six nights a week at the Roll Inn Tavern.

"Larry Coryell had a jam session going every Sunday afternoon at a coffeehouse in the U District called the Queequeg," recalls Heldman. "Shortly after that, Larry decided he was going back to New York, so I took over the session."

From the U District, Heldman moved into an apartment in the turreted building on Eastlake, opening the Llahngaelhyn below.

The made-up name sounded deep, but in fact it meant nothing. What went on inside, however, did. The now legendary jam sessions, with Heldman playing bass in a free, guitarlike style inspired by the great Scott LaFaro, sometimes went on for 15 hours and served as a safe, open-minded training ground for young musicians. Saxophonist Carlos Ward, later with Abdullah Ibrahim, was a regular. So were guitarist Ralph Towner, trumpeter Ron Soderstrom and reed man Walter Zuber Armstrong. One week, McCoy Tyner sat in three times. Chick Corea came by as well.

The place itself could be a bit bizarre. Heldman had a tendency toward paranoia, and for a while hung tinfoil to deflect alien "rays."

Some of his fears were justified. The Vietnam War was on, and anything alternative was suspect.

"We had a lot of trouble with cops," says Heldman, who adds that he did his best to keep drugs out of the club.

But most memories of the place are warm and nostalgic. The reunion, which will feature continuous performances, should be great fun, as well as a living history lesson.