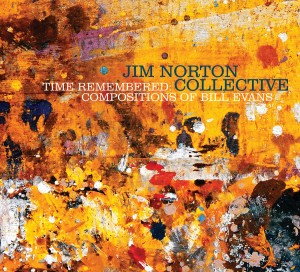 ...one of the most satisfying and revelatory investigations into the music of Bill Evans since the pianist/composer's death...
- Andy Gilbert, SF Chronicle

Originally from San Francisco, Seattle-based composer, arranger, and woodwind multi-instrumentalist Jim Norton returned to the Bay Area to reunite with a stellar cast of former bandmates for a wide-ranging exploration of the compositions of Bill Evans. With his distinctive harmonic language and experimentations with mixed meters, polyrhythms and non-traditional forms, Evans's music provides an intriguing platform for Norton's inspired arrangements.

Bop-N-Jazz (Brent Black)
Like Bill Evans? Looking for some nice piano? Keep moving...The Jim Norton Collective moves past the traditional and into a more avant garde base from which to examine the harmonic intent of Evans. While the liner notes may give one the impression this is a big band release, don't be fooled. At times there are large ensemble arrangements which the ...

Midwest Record (Chris Spector)
Hmm, a big band tribute to Bill Evans without a piano or "Waltz for Debbie"? A former Bay area sax man heads back into town to hook up with old bandmates for a tip of the hat to Evans that takes his music in a whole other direction with quite satisfactory result. Feeling almost like a jazz into classical session, the whole crew must have loved Ev ...

All About Jazz (Jack Bowers)
The late Bill Evans was so celebrated a pianist that even some partisans may overlook the fact that he was also a splendid composer with a number of oft-revisited jazz themes to his credit. Saxophonist / arranger Jim Norton hasn't forgotten, and has entrusted Time Remembered, his debut album as leader of the Jim Norton Collective, to music written ...

Audiophile Audition (Pierre Giroux)
Often overlooked by his brilliant pianistic skills, Bill Evans’ efforts as a composer were impressive although they were more often harmonically intriguing, rather than accessible. Jim Norton has brought his impressive arranging skills to bear on a diverse selection of Evans material to create a sound pallet that delights the ear in his release T ...

Downbeat (Jon Ross)
For a musical study of Bill Evans, baritone saxophonist Jim Norton didn't simply go for a greatest hits collection. Instead, he chose tunes that form a complete picture of the pianist, culling his collection from less-heard sources and transferring these small-ensemble recordings into big band charts. The noted San Francisco-based sideman assem ...

Jazz Weekly (George W. Harris)
RINGER OF THE WEEK - While this collection represents a tribute to Bill Evans’ compositions, Jim Norton could easily have subtitled this as a remembrance of another Evans, Gil. The woodwind/bandleader here focuses on the famed pianists work as a writer, but Norgon brings together a big band that includes enough brass and reeds to bring to mind vi ...

Jazziz (Michael Roberts)
It's a mystery why Bill Evans' compositions, beyond the usual suspects, aren't recorded more frequently. Certainly, his writing was entwined with his style and personality. But, as multi-reed player Jim Norton understands, the Evans songbook goes far deeper than "Waltz for Debby," Offering rich opportunities for interpretation. On this new col ...

Cadence (Jerome Wilson)
It's always intriguing when a musician's compositions are played by a group where the composer's instrument is nowhere to be heard. So it is here with a CD of Bill Evans works, both obscure and familiar, played by a large band with nary a piano around. This treatment helps you realize how strong Evans' writing was in the first place. Jim Norton' ...

Jazz Scan (Ric Bang)
All serious jazz fans worships pianist Bill Evans, but not everybody is aware of his prowess as a composer. This album, a labor of love by the Jim Norton Collective, presents 13 of Evans' best. As a quick aside, historical accuracy requires the record to be set straight regarding one tune - "Journey To Recife" - which, for years, was credited incor ...