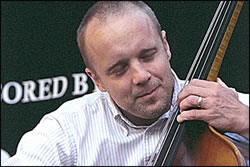 In jazz, the fundamental role of the double bass is holding the ensemble together, providing rhythmic and harmonic support and direction. Watching the outpouring of grief and disbelief flow across social media following John Shifflett's unexpected death from pancreatic cancer on April 28, it quickly became more clear than ever that the San Jose bassist embodied his instrument's essential function. A quiet force who helped bind together the stylistically and geographically sprawling Bay Area scene, Shifflett had just turned 64.

As a ubiquitous accompanist, teacher, mentor and bandmate who played a central if not defining role in more than a dozen ensembles with critically acclaimed recordings, Shifflett was a towering and beloved presence in the Bay Area for three decades, and a longtime faculty member at San Jose State and the California Jazz Conservatory. Diagnosed with terminal pancreatic cancer in March, he kept the news contained to a small circle, which is one reason why the reaction to his passing was unexpected and so raw and heartfelt.

"There are so many musical moments, gigs, recordings, rehearsals, clinics we were on that he made better, more beautiful," wrote saxophonist Michael Zilber. "Utterly without ego or pretension, and about nothing but the music." It was one of many social media tributes to Shifflett that marveled at his combination of superlative musicality and humility.

Bay Area drummer Scott Amendola called Shifflett "one of the greatest humans, and musicians, ever" on a Twitter post.

Shifflett's unassuming persona and outsized musical talent could make for jarring contrasts. On stage, he could play penetrating notes that shifted a song's harmonic footing in surprising directions, and let out a joyous whoop when a colleague played something that struck his fancy. Minutes later offstage he'd offer a self-deprecating joke and praise his band mates. Several former students noted he coupled generosity and warmth with firm expectations of high musical standards.

He formed a particularly musical and sought-after tandem with drummer Jason Lewis, who was a student at San Jose State when he first met Shifflett. Together they forged a highly flexible and persuasively swinging team hired for countless gigs and dozens of recordings. Lewis described the connection as "like a conversation between an old married couple. We're like-minded musically."

Born and raised in Dubuque, Iowa, Shifflett got his start teaching jazz at the University of Iowa, his alma mater. He married Bethany Shifflett in 1974, and the young couple ended up in Minneapolis, where she landed a faculty position in kinesiology at Augsburg College.

The Bay Area scene can thank San Jose State for prying the Shiffletts out of Minnesota by offering Bethany a professorship in 1987. After years of playing electric bass, he was starting to focus on double bass when they made the move west. He never planned or expected to live in the Bay Area, but he made his presence inescapable and invaluable with brilliance that never called attention to itself.

John is survived by his wife Bethany. A memorial jam is tentatively scheduled for San Jose jazz joint Cafe Stritch on May 21. Donations may be made in his name to Hospice of the Valley in San Jose.

Shifflett played on hundreds of albums, including those by such Bay Area mainstays as Scott Amendola, Taylor Eigsti, Peter Apfelbaum and Anton Schwartz. Here are several that highlight his range and buoyant rhythmic feel.