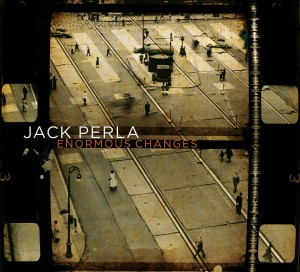 Following recent commissions from the Opera companies of Los Angeles, St. Louis and Seattle, composer & pianist Jack Perla decided here to step out in an entirely different direction. Gathering top Bay-area and NY R&B, jazz and indie-rock musicians, Perla guides them through 14 of his modern original songs. Life changes of his past few years are reflected in the sinister funk of "Swimming Upstream," or the haunting "Lilacs," with the distinctive and powerful voices of Jordan Carp, Crystal Monee Hall, and Robin Coomer featured throughout.

Beginning in New York with his group Music Without Walls, with violinist Mark Feldman and woodwindist Marty Ehrlich, and later in his present home-base of San Francisco, Perla has steadily forged a reputation for his cross-fertilization of jazz and classical music. His operas and instrumental compositions have been widely performed, and he's toured the U.S., Europe and Japan performing jazz and world music. "...a composer of great vision." - East Bay Express.

Midwest Record (Chris Spector)
A very personal album from a cat that has had his share of enormous changes over the last few years, Perla takes a break from his opera world commissions and heads back to late 60s jazz rock for a mental and spiritual cleansing that finds him right in the pocket of pre-fusion where the seeds were being sown. This feels much like the kind of post ...

KUCI, Irvine, CA (Hobart Taylor)
Jazz songs, originals, with the wit and charm of Joni Mitchell and the pop precision of Sting. ...

Improvijazzation Nation (Rotcod Zzaj)
The fourteen all-original tunes from Jack prove beyond all shadow of doubt that he is far more than "just a piano player from San Francisco"… tunes like the splendid high-energy opening title track, "Enormous Changes", feature some excellent jazz vocal work, and propel you into lovely spaces that are reminiscent of shows like "Hair" (for this old ...