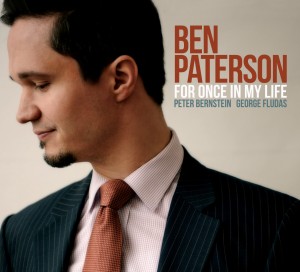 New York based keyboardist and composer Ben Paterson is probably best known for his work as a pianist, notably as long-time sideman to Chicago saxophone giant Von Freeman, and as leader of his own trio. That may change however with his newest release. Here, Paterson shows why he has quickly become one of the top Hammond B3 players on the jazz scene today, combining influences from his former hometown of Chicago, and from his more recent surroundings in New York City. He is joined on this disc by two phenomenal sidemen, Peter Bernstein on guitar, and George Fludas on the drums, each representing a connection to these two great cities. Together this trio follows Paterson's lead, bringing a unique style and sound to the classic organ trio format.

Reviews of For Once In My Life

Midwest Record (Chris Spector)
There's always room for another swinging B3 player that knows exactly what he's doing and former Chicagoan Paterson is the latest to join the line. After having long stints with Von Freeman and others, Paterson might be a new name but he's no newcomer and this long overdue display of chops validates the hard work that made it happen. A tasty orga ...

All About Jazz (C. Michael Bailey)
For his fourth recording, organist Ben Paterson returns to the North West Coast Origin label with For Once in My Life. He employs a standard organ-guitar-drums combo for eleven standards and originals that allows the crack trio he shares with guitarist Peter Bernstein and drummer George Fludas to fully explore the more modern sonic aspects of this ...

The Jazz Owl (Travis Rogers, Jr.)
When one thinks of Ben Paterson, it is Ben Paterson the brilliant pianist. On his 2015 release, "For Once in My Life," Paterson is showing his equally brilliant talent on the Hammond B3. Joining Paterson on this album is the Power (George Fludas - drums) and the Glory (Peter Bernstein - guitar). What a trio! Every solo is a treat and the unison ...

Chicago Reader (Peter Margasak)
Though he only picked up the Hammond B-3 after moving to Chicago from his native Philadelphia in 2004, keyboardist Ben Paterson proved a quick study. He played piano in the working band of tenor great Von Freeman between 2005 and 2012, and his first gig on organ featured Von's brother George on guitar—not a bad pedigree to be a part of. But it wa ...

CD Hotlist (Rick Anderson)
Pianist Ben Paterson leads his marvelous trio through a very nicely varied set of standards, originals, and modern covers on this, his first album on organ. The title track is a re-envisioning of a 1970s soul classic as a jazz waltz that segues into a gospel shout; his take on "Cry Me a River" is gorgeous, his version of Paul Simon's "50 Ways to Le ...

Jazz Weekly (George W. Harris)
B3 player Ben Patterson keeps the keys warm and supple here, forming a nifty trio with Peter Bernstein/g and George Fludas/dr. He has a soft touch on the keys, preferring to let the speakers hum instead of cry, and it works well on this mix of originals and soulful covers. The team percolates on Ray Bryant's "Cubano Chant" and shows its blues hues ...

WTJU - Richmond (Dave Rogers)
Up until now, Ben Paterson has recorded as a pianist, but has always loved the sound of the organ and the "opportunity" to play bass as well as the melody was very tempting. So here you have it: Paterson on organ, Peter Bernstein on guitar, and George Fludas on drums and "Bingo!" you're immersed in a heady and blue jazz disc, featuring a wide range ...

JazzTimes (Thomas Conrad)
The jazz audience contains people, present company not necessarily excepted, who are resistant to the charms of the Hammond B-3. They find it a somewhat vulgar instrument, with unpleasant, artificial sonorities. They all need to meet Ben Paterson. He may be the most purely musical organist out there. He is not into shrieking and raising hell. He is ...

Downbeat (Bill Milkowski)
4-STARS! Philly-born pianist Ben Paterson picked up organ after a move to Chicago, where he became inspired by Windy City B-3 wizard Chris Foreman. Along with quintessential organ trio guitarist Peter Bernstein and Chicago drummer George Fludas, Paterson stays strictly in the pocket on this decidedly old-school offering, which harkens back to clas ...

Chicago Jazz Magazine (Dan Healy)
This has been a wonderful year of recordings from eclectic jazz keyboard players. Just a few months ago, celebrated organist Dan Trudell released his terrific piano trio album. Now we find that the exquisite jazz pianist Ben Paterson has released For Once In My Life, his first Hammond B3 organ album. Although Paterson has played jazz organ for some ...