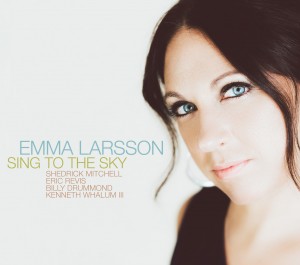 Hailing from Sweden, with her vocal & composition skills further honed in Finland, Emma Larsson released two critically acclaimed recordings in Europe before moving to New York in 2011. For her debut US release, Emma presents a set of seven original songs along with evocative arrangements of the classic "Here's to Life," and Sade's " No Ordinary Love." Along with veteran NY drummer, Billy Drummond, bassist Eric Revis, pianist Shedrick Mitchell and saxophonist Kenneth Whalum III, Larsson harkens the spirit of Betty Carter in her approach to time and tempos, adventurous song forms and her embrace of soaring melodies.

Reviews of Sing To the Sky

All About Jazz (C. Michael Bailey)
New York vocalist Emma Larsson made a splash with her 2010 sophomore effort Let It Go (Imogena). She has populated her recordings with predominantly well-envisioned original compositions, seasoning the album sequence with standards specifically chosen to meld with her unique sound. Her repertoire choice is eclectic without being eccentric. On h ...

Midwest Record (Chris Spector)
She might have moved from Sweden to New York just a handful of years ago but she transplanted her Euro winning ways to the big apple in fine form and serves up the kind of date that serves as an invitation to see her as many nights as possible in whatever venue she's bringing her jazz vocal chops to. The kind of stuff that was made to pack jazz ro ...

Gina Loves Jazz (Berlin) (Matthias Kirsch)
Here's a singer from Sweden who released two albums in Europe before she left the continent and settled in New York in 2011. "Sing To The Sky" is Emma Larsson‘s first record in the US and features seven originals plus two covers. Her voice is wonderfully pure and her intonation and timing just perfect. But it is also her ability to write innovati ...

JazzTimes (Christopher Loudon)
Listening to Emma Larsson, it's hard not to be reminded of the young Nancy Wilson. The Swedish-born, New York-based singer, now three albums into what promises to be an impressive career, mirrors Wilson's silken delivery and her sly interpretative sass. Yet beneath that elegant surface is a tiger ready to spring, a jazz-savvy adventuress worthy o ...